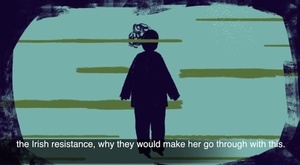 Amal: A Journey Through Conflict, Rape and the 8th Amendment

From the Rape Crisis Network Ireland:

Amal was an asylum seeker who arrived here fleeing her central African country where she had been repeatedly raped as she escaped conflict. Upon arriving here she found out she was pregnant. She was approximately 7-8 weeks along at that point. Amal was horrified and deeply traumatised by the fact of her pregnancy and asked for a termination.

Amal was under 18, a child, now living in direct provision with no independent means and so entirely dependent on the state. She also spoke little English.

Amal needed help with information and making arrangements. Amal needed formal papers to allow her to travel to leave Ireland, go to England and return. Amal had no money. Amal had arrived with some family but they too were asylum seekers without the means to assist her.

Those responsible for Amal and caring for her felt constrained by the 8th amendment in what they could do.

By the time legal arguments were resolved and all professionals and statutory authorities had done what they could and needed to do to vindicate both her right to travel and what was very clearly her real emotional and psychological need to have an abortion, more than 14 weeks had passed.

Amal endured, in great distress, throughout that period and now faced into a late term abortion.

The video is narrated by the Rape Crisis Support worker who accompanied Amal in her personal capacity, as no statutory professional felt they could do so under the 8th amendment.

Amal is now married and a mother, she has a vote and gave her permission for us to tell her story.