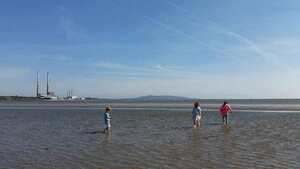 The public have been warned not to swim at Sandymount Strand and Merrion Strand and the beaches are expected to remain closed for the rest of the summer.

The two Dublin strands are among five beaches closed because of an emergency sewage overflow due to a mechanical or electrical breakdown.

A temporary breakdown at a pumping station resulted in a discharge to the Liffey, according to Dublin City Council…

Is There A Marine Biologist In The House?

Get Out of The Water

Down In The Doldrum

20 thoughts on ““Five-Hundred Yards Of Sh*t-Smelling Foulness I Can’t Even Imagine, Or Maybe I Just Don’t Want To.””