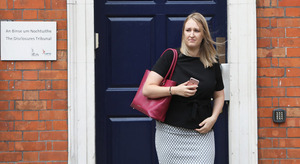 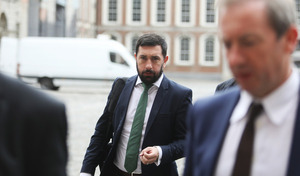 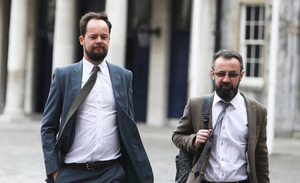 At the Disclosures Tribunal, in Dublin Castle.

John Mooney, of The Sunday Times and Eavan Murray, of the Irish Sun, have given evidence today into the alleged smearing of Garda whistleblower Sgt Maurice McCabe.

Olga Cronin is live tweeting from the castle and can be followed here.

The tribunal has already heard that these four journalists are claiming journalistic privilege.

Mr Mooney was the first journalist to name Sgt Maurice McCabe in relation to his complaints about policing in Cavan/Monaghan back in November 2010.

His article was headlined ‘Internal inquiry clears gardai’ – and it was about an inquiry carried out by the then assistant Garda Commissioner Derek Byrne.

The tribunal is examining allegations by former head of the Garda Press Office Supt Dave Taylor that he negatively briefed journalists against Sgt McCabe – by telling journalists that the “root cause” of his complaints about policing was an allegation made by the daughter (Ms D) of a Garda colleague in 2006.

The allegation made by Ms D was that, during a game of hide and seek in 1998, when she was about six, Sgt McCabe pressed against her.

Ms D used the word “humping” in her Garda statement.

Ms D made the allegation in a statement to gardai about 11 months after her father, Mr D, lost his position as sergeant in charge of the crime unit and was reverted to regular sergeant, following a report made by Sgt McCabe against Mr D for attending the scene of a suicide after drinking alcohol.

Ms D’s allegation was investigated by Supt Noel Cunningham and the DPP ordered that no prosecution take place.

Ms Murray, of the Irish Sun, the tribunal has already heard, was the second journalist to call to the home of Ms D in February/March 2014, after Debbie McCann, of the Irish Mail on Sunday.

It’s been the evidence of Ms McCann and the D family that Ms McCann was turned away from the door when she called.

In contrast, Mrs D said when Ms Murray called to the house, she was brought into the house and Ms Murray, Mrs D and Mr D had a cup of tea and a chat. Ms D wasn’t at the house at this time.

“I suppose, we probably would have said that our daughter was after going through a couple of years of a very, very hard time and that all this Maurice McCabe stuff back in the papers again wasn’t helping her. Probably something along those lines.“

Neither Ms Murray nor Ms McCann wrote articles about Ms D at the time.

The only journalist to write about Ms D in early 2014 – when the penalty points controversy was at its most intense after the then Garda Commissioner Martin Callinan called the actions of Sgt Maurice McCabe and Garda John Wilson “disgusting” at a meeting of the Public Accounts Committee in January 2014 – was Paul Williams, of the Irish Independent.

Mr Williams was the third journalist who called to the D house, on March 8, 2014, with Mr Williams writing four articles based on this interview in April and May 2014 – with the first published on April 12, 2014. Mr Williams is scheduled to give evidence this week.

Mr D also told the tribunal last summer that, around the time Ms McCann and Ms Murray called to the D home, Michael O’Toole, of the Irish Daily Star, also contacted him via Facebook.

When Mr O’Toole gave evidence last week, he wasn’t asked about this alleged attempt to contact Mr D but he said that the allegation pertaining to Ms D was “dead” to him after he first heard about the DPP’s unequivocal directions in respect of the allegation back in 2010/2011.

Mr O’Toole said no journalist “in their right mind” would have sought to write about Ms D once they knew the DPP directions.

The DPP’s directions included the following:

“Even if there wasn’t a doubt over her credibility, the incident that she describes does not constitute a sexual assault or indeed an assault. Further, the account given to her cousin [redacted] differs in a number of respects to that given to her parents and the Guards. There is no basis for a prosecution.”

Despite this, last summer – just four days before Ms D, Mr D and Mrs D gave evidence to the tribunal – Mr O’Toole tweeted: “Hacks saying the DPP “dismissed” allegations. Really? I thought it either said enough evidence for a charge or not”. This tweet was ‘liked’ by Ms McCann.

Earlier: ‘An Awful Lot Of People Haven’t Told Me The Truth’

Disclosures Tribunal: At A Glance

6 thoughts on “Meanwhile At The Disclosures Tribunal”