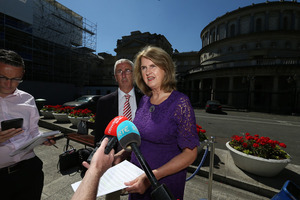 Labour TD Joan Burton (with Senator Kevin Humphries) speaking to the media about a bill for a standing commission on tax PLUS an attempted burglary at her home last night (while she attended a community crime meeting).

“The burglar, who appears to have been a woman, thought she was able to take out one of the panes of glass in our kitchen window and there wasn’t a scratch on it. So I have to say that shocked me more than anything else….”

Then Raise The Scarlet Standard High

Dole For Your Boss