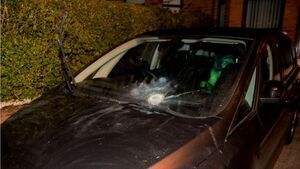 Gerry Adams speaking about attack on his home https://t.co/vCztu9ONKw

From top: Mr Adams’ driveway last night and a tweeted response this morning

The homes of two prominent Sinn Féin members, Mr Adams and Bobby Storey, were attacked with explosive devices….The PSNI have said they discovered the remnants of large industrial firework-type devices, capable of causing serious injury, at both scenes.

Adams thankful no one was hurt in ‘serious attack’ (RTÉ)

A Vote For Everyone