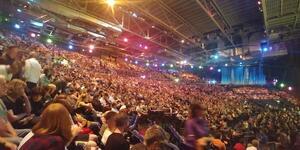 From top: The 3Arena tonight and a recording of Jordan Peterson’s interview with Marian Finucane on RTÉ Radio One earlier.