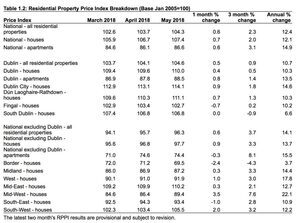 So, Dublin’s houses have their post crash drop in equity fully restored now. Nobody owning a house in Dublin is now in negative equity.

In the 12 months to May, the median price paid by households for a dwelling on the residential property market was €235,000.

Bubble At The Border