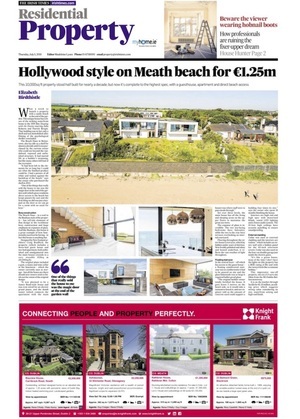 On Saturday, during the ‘Danielle Carroll Summer School’ the matter of the Irish Times and the property industry was raised.

The event, named in honour of a young mother who took her own life while living in emergency accommodation, heard from investigative journalist Gemma O’Doherty.

She said this was helping to pay the salary of journalists such as Kitty Holland, a fellow speaker at the school; with her socially aware journalism providing cover for the paper’s fawning property coverage.

For a newspaper to feature a mother and her children forced to sleep in a car while extolling the value of a one-bedroom cottage in Dublin 8 priced at €500,000 is more than just bad taste.

The reaction was swift.

While acknowledging the paper was partly ‘culpable’ in overheating the property market, Ms Holland then tweeted that Ms O’Doherty was an ‘appalling fantasist’ among other things and stated:

“Soaring house prices would happen with or without the Irish Times. Yes we sell advertising and yes wages have to be paid. Wouldn’t it be wonderful if journalists would work for nothing? The target of ire re housing crisis should [be] our neo-liberal economy. But that needs thought.”

In 2016, when Geraldine Kennedy was invited by the joint committee on the crisis and asked to explain her paper’s role in the boom and crash of the Celtic Tiger, she took a similar route.

She laughed at the mention of economist David McWlliams, who had predicted the crash, calling him ‘entertaining’ but like a ‘stopped clock’.

She described Dr Julien Mercille as a “world class conspiracy theorist’ for highlighting the internal contradictions at the Irish Times.

She stated unambiguously that the standard of news journalism and property journalism at the paper was identical.

Property revenue, she said, had “enabled us to have a correspondent in London, Washington, Paris, Berlin, one in Moscow and for a while one in China.”

It also helped secure matching salaries of €300,000-plus for the paper’s then managing director Maeve Donovan and Ms Kennedy, whose pay at that time was comparable to the editor of The Daily Telegraph.

Ms Kennedy was appointed editor of The Irish Times in October 2002, and retired in June 2011.  In her first four years in charge of the paper, revenue from property advertising increased from €10 million in 2002 to €22 million in 2006.

Unlike most other newspapers, the Irish Times is owned by a trust and the structure allows for the editor to have a seat on the board.

But Ms Kennedy stated during her time as editor:

“The property bubble was never raised or discussed by the board.”

In August 2006, the Irish Times began the purchase of Myhome.ie which would eventually cost upwards of €40 million (and would have been €50 million if it reached certain boom-era targets}; enough to produce the entire paper without ads for a full year.

The actual deal with MyHome.ie, whose shareholding was controlled by three estate agents and a bank, was not signed off until the second quarter of 2007.

Some months after Morgan Kelly’s article in the Irish Times in December 2006 showing how threadbare the underlying  economy was.

Asked if she had voted against the deal at board level, Ms Kennedy said:

“I expressed reservations about the decision but one was not asked for one’s support since there was no vote.”

Ms Kennedy was asked did she not think of calling a vote?

“No, I did not. I did not feel strongly enough about it because there was a case for diversifying in The Irish Times and property was a big revenue stream for the newspaper.”

Did anyone in the Irish Times publish an article criticising the purchase of MyHome.ie?

“We published a story about it. It was announced in The Irish Times.”

But, she was asked, did anyone write any critical comment on it?

“No, but nobody was stopped from doing so. That is very important.”

Following the crash, the paper embraced the new politics of austerity with gusto.

Dr Mercille, Ms Kennedy’s ‘world class conspiracy theorist’, outlined, with evidence, that 57% of all opinion articles and editorials in The Irish Times discussing Irish Government budgets between 2008 and 2013 supported austerity with opposition only to specific cuts voiced by 15%.

“I believe, personally, and would probably have pursued the policy as editor, that there was very little option for Ireland unfortunately but to try to get its house back in order. It required great sacrifices by ordinary people.”

A deputy noted that political parties are subject to limits on donations and protest that those donations have absolutely no effect on their policies, but nobody, least of all the Irish Times, believes them.

Ms Kennedy said the Irish Times should be believed because of its ‘wonderful’ journalism.

A generous bonus structure for property sales executives at the paper remained after the crash.

In fact, little has changed in the way the paper approaches property advertising, property journalism or, indeed, constructive criticism.

Ms Kennedy was asked: did The Irish Times contribute to the property boom?

“I suppose there is the fact that people were looking at houses and here one had a supplement where one could look at beautiful houses. Did that encourage people to go out and buy them?