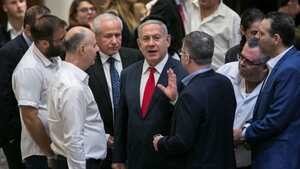 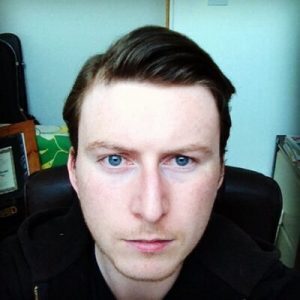 From top: Israeli  Prime Minister President Benjamin Netanyahu and other Likud lawmakers in the Knesset after the passage of the nation-state law last week; Bryan Wall

In 1896 Theodor Herzl published his pamphlet The Jewish State. In its pages was contained his vision of how to acquire the land of Israel and what would be the content of the state.

His writing covered details such as the kind of government the state would be based on, as well as the more mundane such as how many hours a person would work per day.

He also made references to the area in which his future state would be founded. Being located in the Middle East, he wrote that the state could play an important role for the Great Powers of the time (Austro-Hungary, Britain, France). Once founded, Israel would “there form a portion of a rampart of Europe against Asia, an outpost of civilization as opposed to barbarism.”

As for what was to be done with the native population, he was also quite clear in this regard.
Herzl was a man of his time. He was a liberal and a social democrat but the particular milieu lived in ensured that he held non-European states and their peoples in low esteem.

Thus, his proposition for dealing with the population of Palestine was influenced by the era of colonialism in which he lived:

“Supposing, for example, we were obliged to clear a country of wild beasts, we should not set about the task in the fashion of Europeans of the fifth century. We should not take spear and lance and go out singly in pursuit of bears; we would organize a large and active hunting party, drive the animals together, and throw a melinite bomb into their midst.”

Jump ahead two decades and we come to Ze’ev Jabotinsky. Jabotinsky was an advocate of what was to become known as Revisionist Zionism.

His arguments for the creation of Israel were a logical extension of Herzl’s Political Zionism. Jabotinsky called for an “iron wall” beyond which the local population would not be able to pass.

Being a metaphor for military and demographic superiority, Jabotinsky was clear when it came to how the state would be created and how it would ensure its fortunes.

A future Israel would be safe and secure when

“the Jews become the majority” as once the natives accepted this, and realised they would not be able to rid themselves of the Zionist colonisers, they would strive for peace with their new Zionist overlords. He was realistic in the sense that he knew that “we are seeking to colonise a country against the wishes of its population, in other words, by force.”

Perhaps facts on the ground have dictated this, such as the increasing amount of illegal Israeli colonisers in the West Bank and Golan Heights over the last three decades.

The Bill, which was passed by 62 members of the Knesset (Israeli Parliament), declares that:

“The State of Israel is the national home of the Jewish people, in which it fulfills its natural, cultural, religious and historical right to self-determination.”

Furthermore, it states that:

“The right to exercise national self-determination in the State of Israel is unique to the Jewish people.”

The reporting of the law in the mainstream media has, as usual, been less than stellar.

Commentary has ranged from tepid narration to an occasionally decent article that does more than call the law “controversial”, with the The Irish Times, the BBC, and CNN being guilty of this journalistic languidness.

They were joined by the New York Times, the “paper of record”, whose anaemic reporting referred to the law as “divisive”.

Others such as The Atlantic, Democracy Now, and the Irish Examiner did more than simple transcribing. In these cases the law was reported as “formally sanction[ing] discrimination against minorities”, “a hate crime”, and as making “Israel officially a sectarian state”.

Although many of us find this kind of honest reporting laudable it is still short-sighted. This is because it ignores the larger history of Zionism, the history of Israel, and its treatment of the Palestinians.

Having lived under an occupation and Zionist-framed law since 1948, the passing of the law makes very little difference to the lived experience of the Palestinians.

It is just more of the same; albeit under the veneer of legality. Ownership of land has always been restricted to Jewish citizens, with military laws being used to repress Palestinians and confiscate their land decades before the introduction of this law.

Citizenship being limited to Jewish people only is nothing remotely new, with the state having been defined as the state of the Jewish people since its founding, something the mainstream media seems to have either missed or ignored. Such a definition has even caused problems for Jewish citizens in the past.

For example, in 1962 Shmuel Oswald Rufeisen (Brother Daniel) sued the state in order to have it recognise him on his identity card by his nationality and not his religion, the latter of which was, and continues to be, standard practice.

He was a Polish Jew who had converted to Catholicism during the Second World War. Now a monk and no longer identifying as Jewish, yet still wanting to be part of the “Jewish destiny” in Israel, he moved there. Having given up his Polish citizenship he wanted to acquire Israeli citizenship under the Law of Return.

His argument was that even though he was no longer of the Jewish religion, he was Jewish by nationality and therefore entitled to citizenship of the state. His application denied, he then petitioned the High Court of Justice, who also denied his application.

In spite of this, he was eventually granted an Israeli identity card which recorded his nationality as “Not Clear”.

As the Israeli historian Shlomo Sand has rightly pointed out, “It was categorically denied that there was no Jewish nationality without its religious shell.”

It was no longer the individual’s decision as to whether or not they were Jewish. The state would decide who could be a citizen and that, like everything in the state, had to be refracted through the prism of Zionism.

In the context of the new law then, we are simply seeing some legal formalisation of what has been standard practice for decades. That the media does not understand this historical context, and has ignored it, either intentionally or unknowingly, is unsurprising.

The reasons for this are many and have been covered by others such as Howard Friel and Richard Falk. What is more important is the fact that the law is being reported on outside of the historical context in which it has been written and passed.

Outside of this context the media can portray the law as merely a recent deviation in the history of an otherwise “liberal and democratic state”; the only one of its kind in the region, as the well-worn talking point goes.

The media can also portray it as a protective measure in light of the recent events, both in Israel, Gaza, the West Bank, and elsewhere in the region.

An “outpost of civilization” was to be created using “melinite bombs”, despite Herzl’s apparent liberalism. Legalities aside, the needs justified the ends. Secondly, Jabotinsky’s writings also make it clear what actions were going to needed in order to secure the future state.

An Iron Wall of Zionist supremacy was what would ensure the creation and security of the state. Anything less would condemn the project to the dustbin of history.

With this in mind, we can see how the nation-state bill is nothing new or unique. It is merely a continuation of the colonialist strategy that was theorised by Herzl and his acolytes, and put into action by Jaobotinsky and his adherents; and ironically by his ideological enemies such as Ben-Gurion.

The Palestinians have suffered regardless of this new law and will continue to do so no matter what legal formulas are created. That the wider media does not report or understand this demonstrates their blind spots, ignorance, and obsequiousness to state power.

While they transcribe, the history of Zionism continues to discriminate, segregate, and deny basic rights to those it deems unworthy.

‘The Time For Saying Both Sides Are Equal Is Over’

25 thoughts on “A Nation State Of Mind”