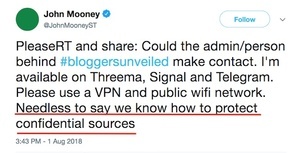 Tweets last night about the Blogging Unveiled controversy from John Mooney, an investigative journalist with The Sunday Times.

The last line in the second tweet is reference to Mr Mooney and his paper’s role in the Maurice McCabe saga.

And barely-veiled criticism of those who confirmed the source of negative and dishonest briefings about the Garda whistleblower.

They Are Laughing At You

15 thoughts on “Needless To Say, He’s Having The Last Laugh”