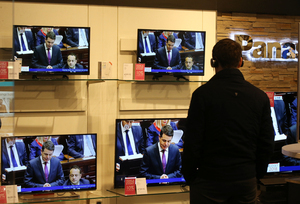 From top: Minister for Finance and Public Expenditure and Reform Paschal Donohoe TD addressing the Dail about  Budget 2018 last year on TVs in Arnotts; Michael Taft

We need to broaden our tax base, keep taxes on the productive economy as low as possible and shift taxation on to unproductive capital, unearned income and environmentally-degrading activities.

That’s why Dr. Tom McDonnell’s proposed net wealth tax (A Household Net Wealth Tax in the Republic of Ireland: Some Considerations) is so welcome. It ticks all these boxes.

During the recession and austerity years, the wealth tax featured as a proposal. Since then, it has disappeared from the public debate.  Now is the time to put it back on the agenda.

There are a couple of starting points to this discussion:

What kind of wealth is held in Ireland? The ESRI report – Scenarios and Distributional Implications of a Household Wealth Tax in Ireland – reproduces data from the CSO: 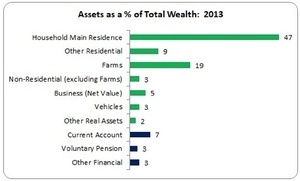 Nearly 60 percent of all wealth is held in land, buildings or other real assets, excluding farms. Financial assets are in blue and make up 12 of the total. In total, there was over €480 billion in gross assets in 2013. A net wealth tax, however, would tax wealth after debts are deducted. Debts made up 25 percent of gross wealth.

Tom proposes a high threshold, a minimum of exemptions and reliefs and a low, single rate tax. An example of this would be a threshold of €1 million net assets (only the value of assets above this amount would be taxed); no exemptions except for pension rights; and a net wealth tax rate of 0.5 percent.

A rate of 0.5 percent may seem low but a government would have to balance the desire to increase revenue with the danger of capital flight / tax avoidance (though capital flight is less of a danger than in the past given the cooperation of taxing authorities in the EU and beyond). 0.5 percent is not high enough to frighten the tax-avoidance horses.

How much would such a tax raise?

It depends on the design. The ESRI provides nine scenarios based on different thresholds, exemptions and rates. I don’t intend to go through all of these (they are on page 24 of the ESRI report, link provided above). There are two scenarios that are close to the above design:

* First, a threshold of €1 million (double if married) with additional relief for children and a tax rate of 1 percent with few exemptions. This would have generated €248 million in 2013 and affected just 1.5% of households.

* Second, a threshold of €500,000 (double if married) with additional relief for children. With few exemptions and a tax rate of 1 percent, this would have generated €622 million in 2013 and affected 6% of households. In both cases

In both scenarios, a 0.5 percent tax rate would halve the projected revenue.

We would need to introduce a mechanism to protect cash-poor, asset-rich households. This is usually done by ensuring that the wealth tax does not exceed x amount of income. This can either be exempted or postponed until such time as payment can be made out of the sale or disposition of the asset (e.g. inheritance).

In short, we are looking at somewhere between €125 and €300 million in revenue for a net wealth tax of 0.5 percent.

However, it should be noted that this is based on 2013 data. Since then the Central Bank has estimated that net household wealth has increased by a massive two-thirds. So revenue would be higher today.

And there is one further advantage. A net wealth tax can create a new audit trail for the Revenue Commissioners who can use this to compare other tax receipts from high-net individuals.

This should not be seen as a stand-alone tax (though it is an extension of the current property tax). It should be part of a drive to increase taxation on assets and unearned income: increasing inheritance and gift tax, higher taxes on unproductive capital activity (currency speculation, property transactions) – leading to the ultimate goal of treating income from capital and labour equally for tax purposes.