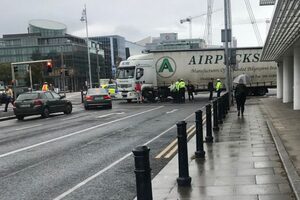 Friday on the Dublin quays

As I look at photo of another cyclist seriously injured this morning, one must ask, when are Dublin authorities going to get serious about cycling in the capital?

I spent five years in Budapest in mid-1990s after Russian rule – Hungary had very low GDP but cycling was totally separated from traffic and whole families could cycle beside the Danube on Sundays.

Hungary was basically a second-world country at that time and yet it prioritised cycling.

It was simply a case of political will – which apparently is not present in Dublin.

Your Bike With Brains

26 thoughts on “End This Cycle”