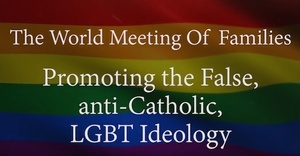 Promotional video for the the Conference of Catholic Families, organised by the Lumen Fidei Institute whomever they may be, which opens tomorrow in the Ballsbridge Hotel, Dublin 4.

A less tolerant rival to the World Meeting of Families.