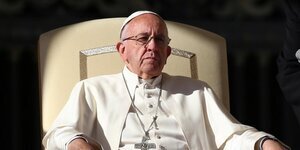 “The Vatican has said Pope Francis will meet victims of clerical sexual abuse during his trip to Ireland this weekend.

“The pope is visiting Ireland on 25 and 26 August to attend the Catholic World Meeting of Families in Dublin and will also visit Knock Shrine in Co Mayo.

“Vatican Spokesman Greg Burke told reporters at a briefing today that the meeting with clerical abuse survivors will not be announced until after it is over and that it will be up to the victims if they want to speak afterwards.”