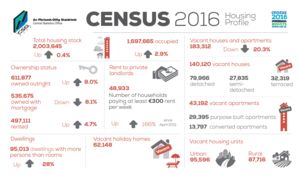 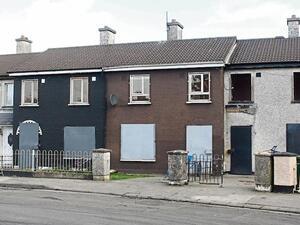 I have become increasingly dismayed by the failure of the Irish Government and other relevant authorities to deal with our housing crisis.

The mantra from many, including some well-intentioned sources, is that building new accommodation is the only solution. This short note sets out to argue that this is not the case and to provide some other solutions.

The 2016 Census (seetop) provides a record of vacant housing stock in the country as at 24th April 2016. The Profile 1 Published Report from the 2016 Census indicates that there are, excluding holiday homes, 183,312 vacant homes in Ireland.

95,596 are in urban areas. 28,188 are in Dublin. Of the Dublin properties 4,546 have been identified as for sale, are owned by someone in hospital, under renovation or for various other valid reasons are not immediately available.

This means that there are 23,642 homes available and habitable in Dublin whilst people sleep in tents, parks, on the street and even in police stations. Countless others are living in hotels, couch-surfing or in other unsuitable conditions.

Whilst the traditional response is that many empty properties would require significant work to be made available, the Background Notes to the Census explains that many precautions were taken before counting a property as vacant.

Only properties considered suitable for habitation at the time of the Census were described as vacant. Derelict and semi derelict properties and those under construction are specifically noted as being excluded from these numbers.

I propose that the Government looks to encourage and incentivise the use of these empty properties in Rent Pressure Zones.

For example, where a property has not been occupied in the last 2.4 years (since the Census) the owner should be subject to a punitive tax of 15% of the market value, per annum, for each year the property remains unoccupied as a residence.

Where the property is occupied as a residence during a large part of the year then the charge would not apply.

Where this tax charge is not paid, after 4/5 years the home should be taken by the State and this measure should be included in any legislation.

This would deal with the situation where the owner of the property is not known or wilfully wishes to keep the property empty long term and not pay the tax.

In any given case, either the property will be occupied, the tax paid or the State will increase its housing stock which can be made available to those who need it.

The reason for a punitive tax is that the property owner will need to decide to either invest and rent or sell the property or pay the tax. A low rate of tax would not provide the same incentive.

Empty State housing should be subject to similarly punitive rules as those owned privately.

This could be done by restricting the budget of the relevant State body by an amount equivalent to the tax whilst the property remains empty.

In addition to this the Fair Deal scheme which provides State support for long term care needs is structured in a manner that does not encourage the use of vacant property owned by long term nursing home residents.

An individual’s private home is taken into account in calculating the payment the individual must make for the first 3 years they are in a care home under the Fair Deal Scheme.

However, if the home is sold the full capital value retained by the individual is included in the assets which are assessed throughout the entire stay of the individual in a care home.

In addition, no element of any rental income which an empty property could generate would be payable to the individual so there is no incentive to make the home available to others and to incur the costs this would necessitate.

The Irish Times recently estimated that there are 23,500 individuals availing of the Fair Deal scheme and whilst some of the associated homes are occupied by family members or would need to be retained for the individual to return to, there are undoubtedly others which could be used to provide accommodation.

This is an obvious area where a change in government policy, e.g. to allow the individual to retain say 40% of any after tax rental income, could make a difference.

Indeed, the fact that the property would generate an income, part of which would be payable to the State, would reduce the cost of the Fair Deal to the State.

A common argument against the type of proposals above is that Article 43 of the Irish Constitution enshrines the right to private ownership of property.

Whilst this is the case, Article 43 also recognises that the exercise of such rights ought to be regulated by the principles of social justice and can be limited by the State to accord with the common good.

So, in a nutshell, there are answers to the current crisis which do not involve the long lead time involved in constructing housing.

The author is a BBroadsheet reader who would prefer to remain anonymous.