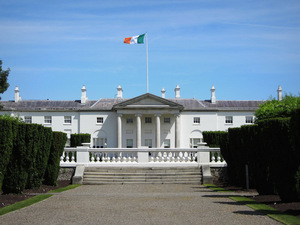 Broadsheet: “How significantly super are these powers?”

LCD: “The powers of the President are set out in Article 13 of the Constitution. At first sight they look impressive:-

The above powers are, however, substantially curtailed by Article 13.9, which provides as follows:

“The powers and functions conferred on the President by this Constitution shall be exercisable and performable by him only on the advice of the Government,save where it is provided by this Constitution that he shall act in his absolute discretion or after consultation with or in relation to the Council of State, or on the advice or nomination of, or on receipt of any other communication from, any other person or body.”

This effectively leaves the President with three main powers:-

– The power in Article 13.2 to refuse to dissolve the Dail as stated above (described as being in the President’s absolute discretion)

– The power under Article 13.2.3 to convene a meeting of the Oireachtas – exercisable after consultation with the Council of State.

As discussed above, there is also in Article 13.7.1 a right to address the Oireachtas. However Article 13.7.3, states that every such message or address must have received the approval of the government.. So a President could convene a meeting of the Oireachtas under 13.7.1 but not necessarily be allowed to address it.”

Broadsheet: “Legal Coffee Drinker, how can I be President?”

LCD: “By being elected President by the direct vote of citizens entitled to vote in Dail elections, held by secret ballot and according to the principle of proportional representation.”

LCD: “But first, you have to be nominated as a Presidential candidate, either by (a) 20 members of the Oireachtas (b) the Councils of not less than four administrative counties, none of whom can nominate more than one candidate.”

LCD: “You have to be 35 years or older, and be prepared to give up all other offices and emoluments for seven years, with the possibility of a further seven.”

Broadsheet: “I can live without emoluments for a few years.”

LCD: [drains Nespresso] “You also have to be prepared to make a following declaration, in the presence of members of Oireachtas and the judiciary, to promise and maintain the Constitution of Ireland.”

Broadsheet: “Whatever my people want.”

LCD: ‘You could be removed by by the Oireachtas, under Article 12.10 of the Constitution.”

LCD: “Or removed by a five-member Supreme Court on the basis that you are or have become permanently incapacitated.”

Broadsheet: “Ah. There’s always a catch. A lot to consider there. Thank you very much Legal Coffee Drinker, you’ll always have our vote here at…

15 thoughts on “So You Wanna Be Elected?”