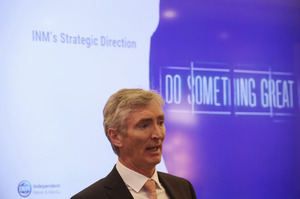 President of the [High] Court Mr Justice Peter Kelly will give his decision [today] on the application by the Office of the Director of Corporate Enforcement [to appoint inspectors to the company] which was strongly opposed by INM.

The ODCE described its application to have inspectors appointed to INM as unusually strong.

It said it was concerned INM’s affairs had been conducted in an unlawful manner for an unlawful purpose.

It alleged there was a culture of deference towards INM’s major shareholder, Denis O’Brien, and it had a suspicion the affairs of the company were interfered with for his benefit….

ODCE application to have inspectors appointed to INM (RTÉ)