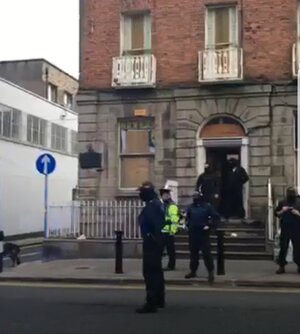 Further to last night’s removal of housing activists by private security members and gardai from a house which they were occupying on 34 North Frederick Street, Dublin city…

The activist group Take Back The City have released a statement, saying:

Yesterday, September 11, 2018, between 18:30 and 19:00, 15-20 men arrived outside 34 North Frederick Street in a van with no registration plate at its front and a UK registration number at its rear. They proceeded to enter the building using electric saws and power tools.

None of these men were wearing any identification to indicate the name of their employer, in direct contravention of the Private Security (Identity Badge) Regulations 2009 which state:

“It is mandatory for all licensed bouncers and security employees to wear one of two types of identity badges while on duty. Under the new rules, employers can either wear their existing license card as a badge or may use one which has been supplied by their employer, so long as it complies with guidelines set out by the Private Security Authority (PSA), the statutory body with responsibility for licensing and regulating the private security sector in Ireland.”

Immediately after the arrival of these private security workers, 3 members of An Garda Siochana attended at the scene.

As community response to the eviction attempt began to build, they were joined by 1 Garda Riot Squad, 1 Public Order Unit, 1 Garda Transit Connect van an 1 Garda Jeep with dogs.

As peaceful opposition to the eviction continued, physical force was used against a number of attendees, while 5 activists were arrested and brought to various Garda stations throughout the North Inner City of Dublin.

It is important to highlight that, as the security firm sent to enter the building contravened the above legislation, An Garda Siochana therefore defended an illegal activity and arrested activists who opposed this illegal activity.

A large mobilisation of activists and members of the community gathered outside Store Street Garda Station in the aftermath of the arrests, demanding their release.

Several of those arrested subsequently presented to hospital for treatment on injuries sustained before and during their arrests.

The extent of injuries sustained at the hands of both the private security firm and the Guards includes: assault leading to severe wounds, shoulder injury and concussion as a result of being kicked in the head. The injuries sustained were so serious in nature they necessitated hospital care.

Take Back the City condemns the actions of the security firm who illegally carried out forceful evictions on occupants at 34 North Frederick Street, a building which had been left idle for more than 3 years by its owners, the McGreal family.

Moreso, we utterly condemn the actions of An Garda Siochana, who facilitated these illegal activities, arrested activists fighting against the ongoing and unprecedented homelessness crisis in Ireland, and used physical force in the process.

We ask An Garda Siochana, and the State at large, how they can justify these actions? We ask them where this scale of physical support is implemented when ordinary tenants are being illegally and unjustly evicted from their homes?

A solidarity rally will take place later today – further details to follow. The ‘Take Back the City – Dublin’ Facebook page will have more information on same during the day. 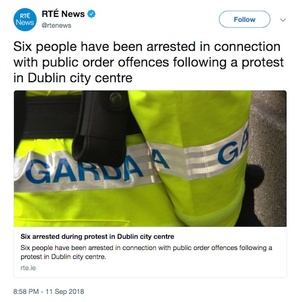 That’s one angle RTE can take…

157 thoughts on “‘How Can You Justify These Actions?’”