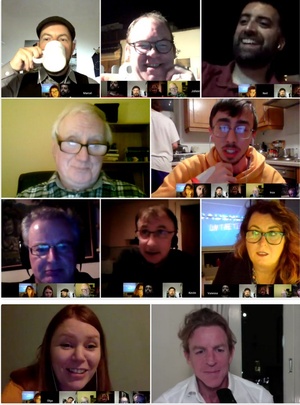 The show, produced by Neil from a deckchair in Spain, can be viewed in its entirety above.

Andrew, of Take Back the City, injured during the forced removal of occupiers from a vacant premises on North Frederick Street, discussed the raid, its implications and balaclavas.

Lawyer Kevin Higgins and Vanessa shared their knowledge of forcible entry law while poet Kevin Higgins recited a 17-year old poem that might have been written last night.

Lawyer Kevin and Ciaran gave us an update on developments at Tuam including a private visit to the site of the mass grave by Taoiseach Leo Varadkar.

Ciaran shared his thoughts on a visit  last Sunday to the Shannonwatch vigil, now into its 17th year.

Neil and Johnny joined us from  different parts of Spain: Neil on a work thing, Johnny attending tonight’s performance of Stephen Garland’s one-man show in Barcelona.

Meanwhile, in the background, Andrew’s housemate whipped him up a tasty meal during  proceedings (in fairness).

AND Marcel’s Buke Club offered us two titles not just for tourists: Hidden City by Karl Whitney and Follow The Old Road by Jo Kerrigan.

2 thoughts on “Safety Masks Of Comedy And Tragedy”