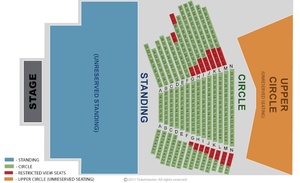 Seating for Hozier at the Olympia Theatre in december

General release 9am this morning. 9am rolls around: all tickets gone. For all 3 nights!

Not the most important thing in the world I know but an absolute disgraceful state of affairs. I fear the only ones crying power are Ticketmaster…

Hozier at the Olympia Theatre (Ticketmaster)

23 thoughts on “The Shrine Of Their Lies”