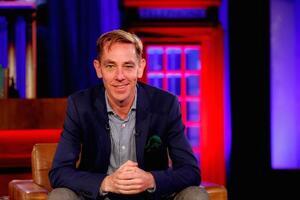 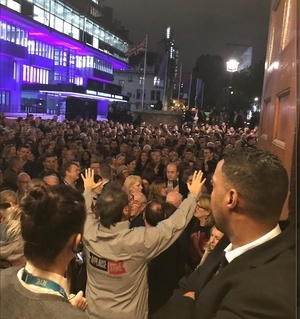 From top: Ryan Tubridy and the scene outside Central Hall, Westminster, London last night when hundreds of Late Late Show ticket holders were turned away

A shambles. Queued for 2.5 hours @RTELateLateShow, constantly told we would get in, hundreds turned away with no apology. @RTEPress staff were rude. Overscribing essential but not like this with elderly & pregnant women. What London Irish community? @ApplauseStoreUK @rtenews pic.twitter.com/ASfdyJBOAW

@RTELateLateShow what an absolute shambles. All you’ve done is piss off the Irish in London with your incompetent ticket allocation. 100s and 100s turned away. #newstalk #rte #latelate #idiots

Too many Micks, innit.

“Audience Tickets for The Late Late Show in London were allocated and managed by UK based company Applause Store are ticket specialists for UK TV audiences.

Tickets were allocated to applicants stating that it was not a guarantee of entry but seats would be allocated on the night on a first come first served basis.

This is standard in UK TV audience management. However such was the demand for this one off show that more people were left disappointed than expected.”

“We have to oversubscribe our tickets to cover any no-shows as all of them are free of charge and sadly not everyone uses them. We have, however, experienced a higher than normal turn-up rate which has meant that regrettably we could not accommodate everyone with a seat in the venue. The demand for Late Late Show tickets is unprecedented.” 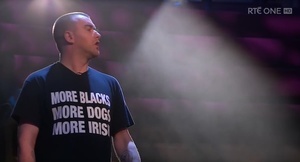 To whom it concerns.

Stephen James Smith on last night’s Late Late Show delivers his poem ‘This Is Community’ about the Irish community and their often second class status in British life.

100 thoughts on “Balls It Up There, Colette”