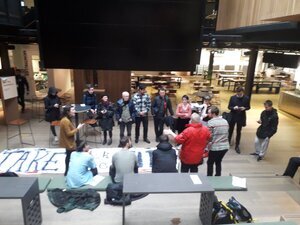 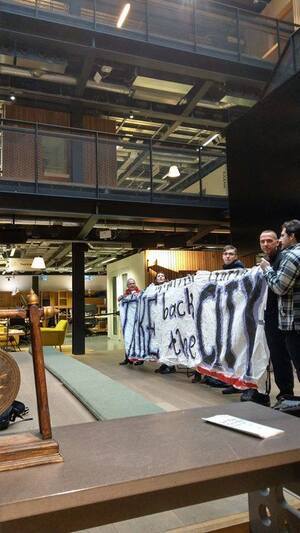 At the Dublin office of Airbnb at the weekend

Members of the Take Back The City action group took advantage of the Open House Dublin architectural festival – when the offices of Airbnb  on Hanover Quay were open to the public – and occupied them for about two hours.

“As of August 2018 there were 3,165 entire properties for rent on AirBnb in Dublin, compared to 1,329 properties available for longterm rent on Daft.ie.

“This is at a time when there are over 1,350 families homeless in the greater Dublin region alone.

“In 2015, Airbnb lobbied the Irish Government to ensure profits made through Airbnb got a substantial tax break.

“In 2017, there was a 63% increase in Airbnb usage across Ireland. During the same time period, homelessness in Ireland increased by 2,000 people.

“Our tenant support groups frequently hear from people who have been evicted on grounds of “significant renovations”, only to find their old homes subsequently rented out on Airbnb and other short-term letting platforms

“Airbnb appears to have rapidly colonised vast amounts of our city, locking people out of homes.

“The budget will accelerate this process, as it incentivises landlords to buy for let only and, as we all know, Airbnb gives you a much higher yield per property than just renting to long-term residents.

“Airbnb have exacerbated the housing crisis in Dublin and Ireland as a whole. A platform that markets convenience by “disruption” has delivered nothing but chaos to the people of our city.

“They have no place in our city – the city should serve the needs of all its people, not the needs of tech, finance and the tourism industry. Today was another strong showing of people power and civil disobedience – the only two tactics that can drive a solution to this crisis.

Take Back the City Demands:

1. All vacant land and property be taken by compulsory purchase order and put to social use as universal public housing.

2. All vacant land and property across the country be taken into public ownership and put to public and community use.

3. Tenant Security and Fair Rent: Ban all evictions, reduce and cap rent at 20% of the occupants income or at €300 per room per month.

“In addition to our original demands we are calling for:

“A total ban on whole properties being offered on Airbnb and similar short-term letting platforms in the city; regulation has failed in other cities, we need only to look at Amsterdam or Berlin to realise this.

“A total ban is the only way of reversing the effect of short-term letting on our crisis.”

Pics: Take Back The City and Barney Doherty

Keep Your Air On