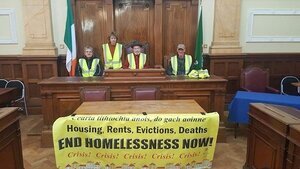 Public access to tonight’s council meeting will be restricted #corkcc

Gardaí have removed four housing activists who were occupying the council chamber at Cork City Hall.

A public protest will take place outside City Hall this evening at 5pm.

21 thoughts on “Any Other Business?”