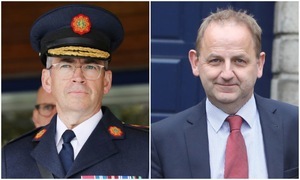 “He did a service for policing, for An Garda Síochána, but policing in Ireland as well. And we’re the stronger for the example that Maurice McCabe has set and stronger for the Charleton Report that’s been delivered.

“I regret that I hadn’t met him before, under, you know, more normal circumstances because I think a lot of his views in policing are the views that I would have held as well.”