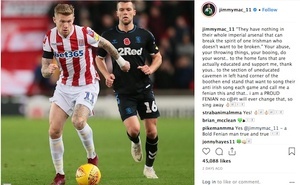 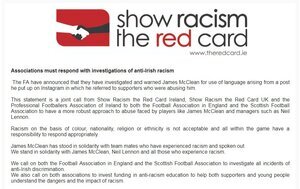 A joint statement has been released from the Professional Footballers Association of Ireland and the Irish and British branches of Show Racism the Red Card, in support of Stoke City player James McClean, from Derry, who refused to wear the poppy when his side faced Middlesborough last Sunday.

Mr McClean was warned yesterday by the English Football Association over a post he wrote on Instagram in which he responded to critics over his refusal to wear a poppy.

We Shall Not Sleep, Though Poppies Grow

18 thoughts on “‘Racism On The Basis Of Colour, Nationality, Religion Or Ethnicity Is Not Acceptable’”