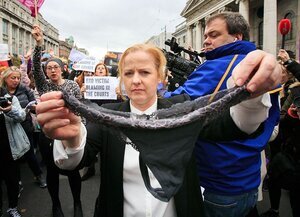 Solidarity TD Ruth Coppinger at the Spire on Dublin’s O’Connell Street on Wednesday; Ms Coppinger in the Dáil on Tuesday

A criminal trial in Ireland, in which the lawyer of a man accused of rape cited the lacy underwear worn by a woman as a sign of her consent, has ignited outrage across the country and beyond.

During the closing argument, the defense lawyer asked the jury to consider the underwear worn by the 17-year-old woman at the time prosecutors said she was raped in a muddy alleyway by a 27-year-old man.

“Does the evidence out-rule the possibility that she was attracted to the defendant and was open to meeting someone and being with someone?” the lawyer asked, according to The Irish Times. “You have to look at the way she was dressed. She was wearing a thong with a lace front.”

The man was acquitted, and the case immediately drew calls for accountability and sparked a national dialogue about consent and victim blaming. Hundreds of women and men with posters and lace underwear in hand protested in five cities across the country on Wednesday.

‘The Way She Was Dressed’ 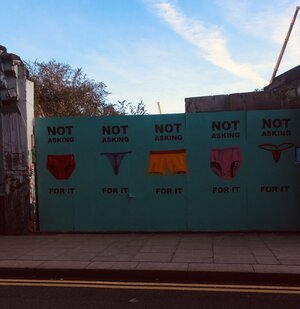 In Thong Merrily On High

Part Of The Family

7 thoughts on “Anything Good In The New York Times?”