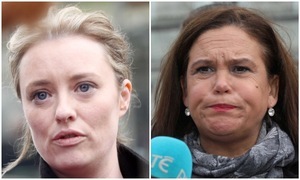 In 2010, Ms Cahill alleged that she was repeatedly raped by prominent IRA member Martin Morris when she was 16 and that her allegations were dismissed by a Sinn Fein ‘kangaroo’ court while the alleged abuser was subsequently moved to Donegal.

In 2014,  Mr Morris, who denied the allegation, was acquitted after his trial collapsed.

The trial collapsed after Ms Cahill, and two other women who alleged Mr Morris abused them, withdrew their evidence citing a loss of confidence in how the case was being handled.

Last month, the Ombudsman, in Northern Ireland, found that the women were failed by the PSNI and recommended that four officers be disciplined.

Ahead of her meeting with Ms McDonald, Ms Cahill spoke to Áine Lawlor on RTÉ’s News At One.

During the interview, they had the following exchange:

Aine Lawlor: “It’s been four years, as you say, since you first went public on [BBC] Spotlight. What personal price have you paid?”

Máiría Cahill: “Horrendous. My health has suffered, Áine, on a number of fronts. Mentally, I’m kind of, quite OK, I suppose I’m a but stubborn. But I have, at the minute, no feeling in the left-hand side of my face, for example. Or in my mouth, because I woke up, in the aftermath of the Ombudsman report, unable to feel that.

“We’re still trying to find the root cause of that. I’ve had to take a lot of time off work. My family relationships, the wider family relationships have suffered because some of those people still claim allegiance to the Republican movement for example.

“I think I was treated despicably by Sinn Féin and their members, graffiti went up on the walls of West Belfast, in the area which I was raped for example. You know, quite a public shaming of someone who came forward essentially looking for an admission and that was all I wanted, for people to admit that it was wrong. And it shouldn’t have happened.

“To date, that hasn’t happened. And I’d like to think that someone from Sinn Féin would have a modicum of decency around them to finally admit that.”