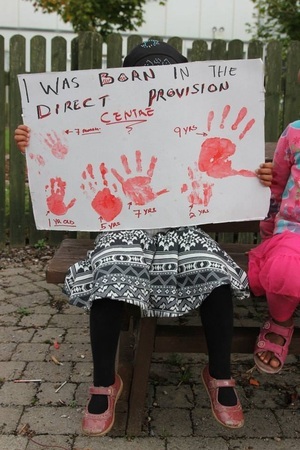 Life On The Outside

A radio documentary by Bairbre Flood looking at the lives of  three women who have survived Direct Provision.

For my latest documentary I talked to three women; Elsie Nwaora, Nomaxabiso Maye and Florence Eriamantoe who lived for years in Direct Provision.

This was the system set up almost 20 years ago to provide accomodation and meals to asylum seekers while their claim is being processed. Intended to be a short-term solution, it seems to have created even more long-term problems.

The lack of access to cooking facilities, the overcrowding (Florence lived in one room with her family for more than six years), the lack of privacy and the strain this puts on family dynamics are all obvious: but perhaps what’s less tangible is the subtle loss of dignity and self-direction that Direct Provision incurs. ‘You have no autonomy’ as Nomaxabiso puts it. Everything is done for you. Who wants to live like that?

Most Direct Provision centres are situated in isolated areas, and Noma recalls how the place she was sent to, Drishane Castle, County Cork was ‘spooky’.

They’d almost no contact with the locals there. ‘It was very rare you’d see people interacting with Drishane residents.’ Noma said.

I put it to Noma that it’s hard for Irish people to get to know people in Direct Provision as we usually meet people through work and college, and she agrees that ‘this is where the trick is.’

Florence and Elsie also described how isolated they felt from the wider community and Elsie noted,

This physical isolation isn’t helped by the fact that none of the women were allowed work during their time in Direct Provision. (Although there is a limited possibility for this now following a Supreme Court decision earlier this year, none of the women would have qualified as their cases were under appeal.)

‘You weren’t able to do anything’, Florence said. Boredom and anxiety wear away at the body and mind and the effect on the physical and mental health of people in Direct Provision can be devastating.

‘I won’t lie, I went through this myself and I didn’t see it happening, it was just the little things. I don’t have sleep, no appetite, this and that…and this is what the government is failing to understand because it’s costing the state more to keep people in that way.’

Nomaxabiso managed to get on a course, however she says:

Nomaxabiso is just graduating from her degree in social work this year and says that she would like to work with migrants because she understands where people come from, ‘people come with various challenges from various backgrounds.’

Florence too is studying social work in UCC, and both women hope to bring their experiences to help families in the future.

One of the most distressing parts of being an asylum seeker is the threat of deportation which hangs over you. All three women spoke about deportation being the worst aspect of their lives.

Florence described how immigration officials would come in the middle of the night to take people away.

‘They would have their cars and staff members surrounding the buildings…There was this woman we had to hide in the wardrobe with her kids. I’ve never seen anything like that. Those kids were the kind of kids that are very active, but for the first time in my life I saw kids that were quiet. That’s when it dawned on me that the kids knew everything that was happening. It was horrible.’

Florence’s husband was deported, but she was allowed stay while her children’s case was being heard through the courts.

‘I know ten to fifteen women, their husbands were deported and their family has been destroyed.’

All three women spent years trying to rebuild their lives after getting their papers and moving into the wider community. The sudden switch from years of institutional living isn’t easy.

Elsiedescribes how her daughter was six years old when they finally got their papers. Having never lived anywhere other than the Hostel, her daughter couldn’t get used to a house away from the friends she’d grown up living with

: ‘She’d always say, ‘Mum, I don’t want to stay here, let’s go back to the Hostel…maybe if she didn’t spend six years in the Hostel and she just grew up in the house she will just see that is normal.’

Largely hidden away from Irish society, people in Direct Provision rarely have their voices heard, and there’s much we can learn from these women’s experiences.

Bairbre Flood: Life On The Outside (Soundcloud)

11 thoughts on “Everything Taken Down”