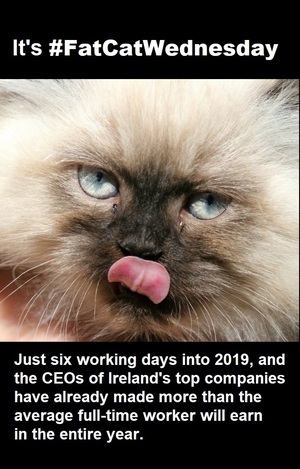 Today, just six working days into the New Year, the average remuneration for CEO’s in the top 26 Irish companies (which represent 95 percent of the market value of the Irish Stock Exchange), has already exceeded the average yearly pay for a full-time employee.

The rest of the year is cream.

ICTU has release their latest survey of CEO compensation. They found that in the top 26 Irish companies CEO pay – basic pay, bonuses, long-term investment plans, benefits-in-kind and pensions – now averages €2.3 million. This compares to annual compensation for a full-time employee of €53,800 (including employers’ social insurance and other in-work benefits). 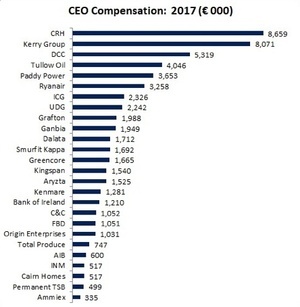 Starting at the top we find the CEOs in CRH, Kerry Group, DCC, Tullow Oil, Paddy Powers and Ryanair all had compensation packages in excess of €3 million.

Not only is the level of CEO remuneration high, the rate of growth has also been high.  Between 2009 and 2015 – the years when we were all supposed to be tightening our belts – the average increase in CEO remuneration was 75 percent, or €890,000.

In 2017, this upward trend continued though at a slightly slower pace. Average CEO pay increased by 6 percent. This compares to an increase for full-time employees of 1.7 percent.

CEO compensation is made up of a number of components: 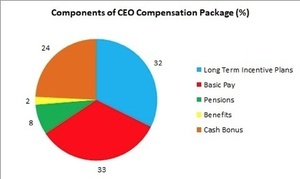 Some may argue that CEOs earn their level of remuneration. However, there is no consensus among scholars regarding a link between CEO pay and firm performance.  Indeed, there are links between high pay and negative economic and enterprise impacts.

Chris Dillow’s post here refers to a number of studies that show high pay can lead to lower productivity, perverse incentives, and a disproportionate focus on short-term indicators at the expense of long-term outcomes such as investment.

Further, we should remember that CEO pay is not set by the ‘market’ but rather by remuneration committees; in other words, the CEO’s peer group.  The purpose of these committees is to provide a robust criteria and company comparisons in order to set CEO pay.

But as TASC’s report, Mapping the Golden Circle, points out, there can be an incestuous relationship between, CEOs, Board Directors and members of remuneration committees.

The latter sit on the boards of companies and board directors can be CEOs or senior executives of other companies:

‘ . . . executive compensation in large publicly traded firms often is excessive because of the feeble incentives of boards of directors to police compensation … Directors are often CEOs of other companies and naturally think that CEOs should be well paid. And often they are picked by the CEO.’

To put it another way, what would be the reaction if we proposed that workers set the wage of other workers in comparable firms by committee?

If high CEO pay has negative economic and firm consequences, along with offending our more egalitarian instincts, what can be done?  ICTU has a number of suggestions:

Make shareholders’ decisions on executive pay binding rather than advisory (yes, the ‘owners’ of the company do not have an automatic right to collectively set pay – so much for ‘ownership’)

A higher tax on very high incomes (e.g. in excess of €1 million).

However, if high executive pay is part of a larger picture, we need broader economic and social strategies to address the problem of the widening gap.  There isn’t the space to go into that here but as a start I would propose the extension and deepening of collective bargaining.

As the OECD pointed out – and discussed here – the top 1 percent have a lower share of income in economics where more workers are covered by collective bargaining.

This makes sense: collective bargaining puts upward pressure on low and average incomes and, so, puts downward pressure on higher incomes – whether in the firm or the economy.

There is no magic bullet in all this.

ICTU continues to do the debate a service in providing annual information on CEO pay.  Hopefully, this will provoke greater public, political and academic interest in the subject.  Excessive gaps in income and high levels of inequality are socially corrosive and economically inefficient.

If we’re not careful, every day in the future will be a day for fat cats.