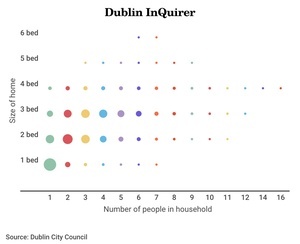 Screengrab of an interactive graph created by Dublin Inquirer

….Of the one-bedroom council homes in the Dublin City Council area, 111 have three or more people living in them.

At the other end of the spectrum, there are homes that are emptier. For three-beds, 823 have only one person living in them. For four-beds, 113 have one person in them, and 232 have two people in them.

“The bottom line is that there are hundreds of underused or overcrowded tenancies or homes where Dublin City Council is the landlord,” Cuffe said.

…“It’s a minefield this whole issue,” says Cuffe. “We’ve seen huge controversy in the UK, where taxation was proposed on empty bedrooms. I don’t think we should go down that road.”

“But at a time when we have tens of thousands of homeless people in the city, we do have to look at a better use of the limited housing stock that we have,” he says.

Hundreds of Council Homes are Overcrowded, While Others Are Underused, Figures Show (Lois Kapila, Dublin Inquirer)

17 thoughts on “‘Hundreds Of Underused Or Overcrowded Tenancies’”