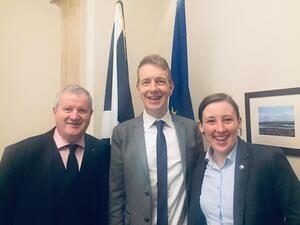 If memory serves me right, back in the early 1980s Fine Gael ran a fancy half-page European election advert in the national newspapers that featured a massive photo of a big Aer Lingus jet taking off into the skies.

Beside the photo, in huge font, was the slogan: Send Your Best to Europe and beneath it appears the pics and short bios of its full slate of candidates.

It was quite an effective ad, until several wags observed that the airplane featured was a jumbo jet. These which only flew to the United States, so Fine Gael was sending them in the wrong direction.

Sending our best Europe is more important now that it was back in the 1980s. This is partly due to Brexit, but not exclusively.

As Fianna Fáil’s Micheál Martin said last Friday in a carefully considered speech to the Killarney Economic Conference: Ireland has to start playing a far more active role in shaping and promoting a more urgent and ambitious agenda for the EU.

Crucial to Ireland’s pursuit of this stronger agenda is the question of who will take on the three most important and senior roles in the EU.Who will be the next Donald Tusk, the next Jean-Claude Juncker or the next Mario Draghi?

“…during 2019 we have to speak up while the Union goes about replacing all of its senior leaders. By this time next year members states will have chosen new leaders for the Council, the Commission and the European Central Bank.

We can’t afford for these decisions to be based on anything other than finding people who will not only lead their institutions well but will help to address a real lack of public understanding and faith in these institutions.”

The one institution not featured in Martin’s list is the European Parliament. This is not because it doesn’t matter, but rather because its composition will be in our own hands.

This year’s European Parliament Election will be the most important one since we started having direct elections back in 1979.

One way of ensuring that voters take the European Parliament election seriously is for the political parties to take it seriously by nominating candidates of calibre and ability.

Political parties, at headquarters and national level, need to select their European candidates using the same criteria they use to select top rung candidates for the Dáil – and if that means running MEP candidates who are currently sitting TDs, then so be it.

Avoiding a by-election here or there should not trump the need to pick the best candidates and to treat this European Election as if it was as vital and critical as the next general election.

As with almost every general election, the cockpit of this election will be Dublin.

What happens in Dublin is vital and the decision of two of the three current MEPs not to run again means that the election in Dublin will be fascinating. Add to this the likelihood that the capital will be electing 4 MEPs – though a withdrawal or delay to Britain’s Article 50 process, may bump this back down to three.

Within Dublin the race for the Fianna Fáil party nomination will be critical. On the surface it looks like a four-way competition but, to be brutally frank, the choice is binary.

And if you think Tiernan is not the kind of candidate you would expect Fianna Fáil candidate to field, well think again – because Tiernan is as dyed in the wool Fianna Fáil as any candidate the party has produced over the past decade.

I first encountered Tiernan back in 1992 when he was one of the Kevin Barry UCD Cumann members who came in to help Ben Briscoe TD on the (in)famous 10 day “long count” to decide the last seat in Dublin South Central – an event referred to by Ben at the time as “The Agony and the Ex TD”.

While Tiernan has followed the same political paths as others: elected as a Fianna Fáil county councillor, serving two terms, including some years as Mayor of Bundoran, running Dáil election campaigns for Pat (the Cope) Gallagher and former Tánaiste Mary Coughlan, Tiernan has gone beyond them and seen that the way to change things is to reach beyond your own traditional confines and loyalties.

Across from Tiernan, in Column B, you have three former ministers, each seeking a return to national politics after some time away though, to be fair to Mary Hanafin she did get back into local politics as a councillor for Blackrock in 2014.

All three former ministers, each carrying a family name with strong political associations: Barry Andrews, Mary Hanafin and Conor Lenihan have not just proved their capabilities as Ministers, they each have admirable ministerial records in their respective portfolios: Lenihan in international development, Barry Andrews in Children’s rights and Mary Hanafin in Education. Not alone that, all three are decent media performers, some perhaps more colourfully so than others.

On this basis it can be argued that the Fianna Fáil in Dublin cannot avoid picking a strong candidate, but – and this is why I lump the three ex-ministers together and describe the choice as binary – the perceived strengths of the three amigos is also their collective weakness.

Reading the campaign emails and social media posts announcing their candidacies, it was easy to mistake one for the other. Each claimed their time as a minister, their Dáil experience and their recognised family name as a unique qualification to run, but the “unique” strengths which they each see as defining them barely separates them.

It is 15 years since Fianna Fáil last won a European Parliament seat in Dublin with Eoin Ryan (in 2004). That is a long time.

If Fianna Fáil wants to win a seat in Dublin this time – and it needs to – then it must reach out beyond its existing hinterland and attract voters who not have seen Fianna Fáil as speaking to or for them. Only one of the candidates on offer has the proven ability to do this.

The seat will not be won by nostalgically getting the old band back together to play some favourites – no matter how much some of us may care for the tune. The choice is clear.

5 thoughts on “Derek Mooney: What Separates Brady From The Bunch”