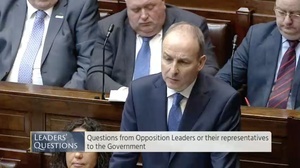 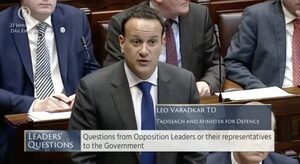 Fianna Fáil leader Micheál Martin raised the recent death of Orla Church – who was the 21st women to die in relation to the CervicalCheck smear test scandal.

Mr Martin said, it was his understanding that, some free repeat smear tests conducted in the wake of the scandal have been rendered invalid because the tests expired due to delays caused by a backlog.

The provision of these free repeat smear tests ended on December 31, 2018.

Mr Martin raised an article in The Journal on January 9 which showed that the Minister for Health Simon Harris had been advised against providing free repeat smear tests, as it would cause delays and damage the “efficacy of the programme”.

From their exchange in the Dáil…

Micheál Martin: “On average, CervicalCheck tests about 230,000 smears annually. The Minister’s decision last April added an extra 90,000 to 100,000 to that volume. The Minister was warned repeatedly over a long period that this was wrong yet he proceeded without any additional resources being provided. The additional volume of tests as a result of the decision has created an unacceptable and enormous backlogs and women have been waiting for up to six months for the results of their tests.

“There is a further problem. I understand that the delay has impacted on the quality and efficacy of the tests and has rendered a significant number invalid.”

“… I asked the Minister, Deputy Harris, a specific question on this issue on 15 January. I asked for the rationale of announcing the repeat cervical smears against expert advice and why he did not make that public at the time. He avoided answering that part of the question and I have officially complained about this under Standing Orders. The Minister has withheld information from the Dáil and the public on developments in the CervicalCheck programme that are clearly in the public interest.”

“….Was the Taoiseach made aware of the serious developments by the Minister, particularly regarding the validity of a significant number of tests that had been rendered null and void because of the delay? Normally, the virus would be tested for within ten days, yet people are facing six-month delays. This was discovered last year but not revealed by the Minister or anyone. In essence, that information has been withheld. That is why the service was discontinued, Taoiseach. The minister’s decision was against expert advice that warned him, repeatedly, that this would damage the entire programme.

“It is my understanding and it is my information that the programme is in jeopardy because of all of this. And further there’s significant decisions and communications would have to occur because of this. I asked were you made aware of this by the minister?

“Would you please answer that question.

“I asked as to the rational behind the minister’s decision – against repeated expert advice and that this was not clinically warranted and it would damage the efficacy of the entire programme.

“Taoiseach if we’ve learned any lessons about this, the withholding of information, the secrecy and denial that was part of the first phase of this scandal is being repeated yet again.

“In terms of the lack of upfront, honest responses to parliamentary questions and the ducking and the diving and the papering over the cracks and the covering up that goes on then subsequently.

“So we’re now all led to believe that it just evolved that the decision was closed down in December. It didn’t just evolve. It was a discovery made, Taoiseach – that tests were invalid because the expiry date ran out because of the backlog and the delay. That has consequences Taoiseach in terms of many women involved.

“And we need, I would ask you Taoiseach will you ensure that the minster comes before this House and makes a comprehensive and transparent statement in relation to what I have asked today?”

Leo Varadkar: “Thanks Deputy. The rationale behind the decision by Minister [for Health Simon] Harris to offer free out-of-cycle smear tests back in May or June was to respond back to the anxiety by many women that their smear test may have been misread and it was done in good faith, in good faith, for good reasons.

“It was never intended to be a permanent offering, it was only ever intended to last for a few months and those free tests cease to be available at the end of December this year [sic].

“I was made aware by Minister Harris a few weeks ago that there was a backlog and this was creating problems and, as a result of that, some tests had expired and would have to be repeated. And the minister, for that reason, worked with, is working with the HSE to deal with that and to make sure that additional capacity is found in order to catch up on the backlog.

“I’m sure the minister will be happy to come before the House and make a statement on it.”

When Mr Martin pressed Mr Varadkar to state when he was specifically informed of the matter by Mr Harris, Mr Varadkar repeated it was “a couple of weeks ago, I don’t remember the exact date”.

Mr Varadkar said he didn’t want to mislead the Dáil and repeated that he couldn’t remember the exact date he was informed.

Previously: “I Don’t Believe I’m Being Told The Truth”

Up to 1,000 women could need repeat smear tests. Backlogs meant earlier tests have expired. It is still unclear of any have been told yet or not https://t.co/jbHCR8dUuS via @rte