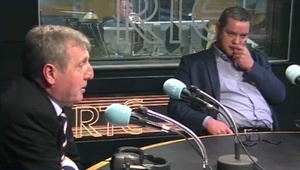 Minister for Agriculture Michael Creed (top left and above) spoke to Audrey Carville about the prospect of a no-deal Brexit.

Audrey Carville: “Who will check the contents of that tanker-load of milk as it prepares to cross the border on a daily basis?”

Michael Creed: “What is abundantly clear and has been from day one, Audrey, is that this government is not countenancing in any circumstances returning to a situation where we have hard border infrastructure. That…”

Carville: “So where will the border be? Will you check it in the factory?”

Creed: “That will not happen. There will not be hard border infrastructure. We have a solution to these issues in the context of the Withdrawal Agreement. The UK Government must be the focus now. It is not for us, who have engineered this solution, in negotiation with the British Government…”

Carville: “Minister, many people listening to you this morning might think you are treating us all as if we are stupid.”

Creed: “No, what I am clearly stating is this is a moment of high political drama and it is imperative that the Irish Government’s position is clearly understood in the context of a debate that is current and fluid in the UK parliament. We have a solution to these issues. We share the same position that the Northern Ireland Secretary of State shares in the context of there being no hard border under any circumstances.”

Carville: “So you are not prepared…Yes, but you’re not prepared to say, in the event of a no-deal, where the European Commission is absolutely clear – there has to be checks on live animals and animal products, where those checks will take place and who will do the checking?”

Creed: “We share the exact same position as articulated by president of the Commission when he articulated in the Dail chamber that there would be no hard border infrastructure sought by the European Union.”

Carville: “So where will the border be?”

Creed: “Well, the border issue is dealt with in the context of the backstop. We are not in a situation…”

Carville: “Not in a no-deal. Minister, please, with respect, all of us are invested in this, as is the most of the country is, understands that that is not the case. The Withdrawal Agreement does not deal with a no-deal Brexit – so I’m asking you in the event of a no-deal Brexit, who will do the checking on the animals and food products? And where will they be checked?”

Creed: “Well we have arrangements in the context of the central case scenario or a hard Brexit for border inspection posts on an east-west basis. In fact earlier this morning I was down in Dublin Port looking at our preparations in that context.”

Hmm. Getting serious déjà vu from listening to Simon Coveney, Michael Creed and all denying there will be a hard border if there’s a no-deal Brexit. They just need to send out Noel Dempsey and Dermot Ahern now and I’ll definitely believe them. https://t.co/31ZWEk8vpv

‘It’s Time For The Beef Sector To Fight Back’