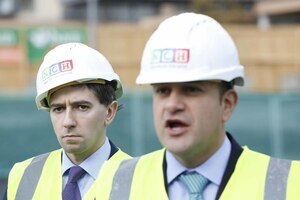 The Department of Public Expenditure and Reform (DPER) raised concerns nearly two years ago about governance arrangements for the development of the planned new national children’s hospital, official files suggest.

The department said it had been assured by the Department of Health that there were “sufficiently robust” arrangements in place to oversee the construction of the hospital, which is now at the centre of controversy over a massive cost overrun.

Glad that Finance/PER Committee has accepted my request to call in DPER General Secretary regarding the National Children’s Hospital. DPER must accept and stop hiding behind protocol. All information must be put in public domain as cost spirals out of control

BREAKING: The Independent review into the rising costs of the National Children’s Hospital has been told to “stop short of determining culpability at individual level”. So no one will be held accountable

Former @finegael TD, @PFitzpatrickTD has told us this week what is happening with the delivery of the National Children's Hospital – there is a CARTEL at work. #TodaySOR#NCH https://t.co/3hs32oNDSJ

Read It And Weep