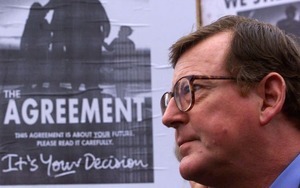 British Prime Minister, Theresa May is in Belfast today to make a speech at… sorry… to give a speech to local business leaders. The speech will re-state her “absolute commitment” to avoiding a hard border, post Brexit.

Her statement of commitment is welcome, just as welcome as it was when first made over two years ago, but with only seven weeks to go to the March 29 exit and after 18 exhaustive months of negotiations, surely it is not asking too much to expect her to say how she will turn this commitment into reality?

This is a crisis of her own making. She says she is committed to no hard border, but then she also says that she is equally committed to having a Brexit that takes the United Kingdom of Great Britain and parts of Northern Ireland out of the EU’s Customs Union and the Single Market, as well as out of the EU institutions.

The hard truth is that she cannot commit to ensuring no customs union, no single market and no hard border at the same time. You can do two out of three, but you cannot do all three.

If she wants to avoid a hard border in Ireland, then simple logic dictates that those who want to have both Brexit and no hard border must yield somewhat on the issues of the Single Market and the Customs Union to ensure there is no hard border.

The Backstop is the way that both sides have agreed – and it is important to recall that the British government have already signed off on this – that Ireland and Northern Ireland can remain part of the same EU-UK customs territory with no tariffs, quotas, or checks on rules of origin until a future alternative arrangement is agreed. The EU has produced a very useful guide to what is actually in the Backstop.

But, the Brexiteers repeatedly shriek, there is no need for this beastly Backstop. Thereby missing the fact that the current version of the Backstop was effectively designed by them.

According to such grand pooh-bahs of Brexit as Johnson, Rees-Mogg and Baker you can magically have all three right now by way of “alternative arrangements”.

Unfortunately, none of them can point to any border anywhere in the world where these arrangements are in place.

As the deputy leader of the UK’s Liberal Democrats Jo Swinson MP put it yesterday, they are:

“…old men, who can’t operate a smartphone, talking about a technology that doesn’t exist.”

The fact that the technology does not yet exist has not stopped even supposedly sensible and moderate British Cabinet Ministers from peddling the myth.

Speaking on last Sunday’s Andrew Marr Show on BBC 1, the British Home Secretary, Sajid Javid, said an alternative arrangement to prevent the return of physical checks on the Irish/Irish border “can be done” with existing technology.

And this is not just me, the Irish Government, the EU negotiations team and the almost every trade and border expert saying it can’t…. it’s the British government too.

Just four days before Javid told Marr that existing technology could do it, on January 30 the Minister of State at the Northern Ireland Office, John Penrose MP told the House of Commons that:

‘I understand that the Cabinet Office commissioned work on what existing software and other technologies are available from other low-friction land borders around the world to see whether they could provide a solution to the problem.’

The conclusion was that no existing off-the-shelf package could deliver exactly what will be needed in Northern Ireland, so new solutions will be needed.

Talk about a lack of joined up government.

Meanwhile, as the Brexiteers continue their ham-fisted attacks on the front door of the Backstop, Lord David Trimble, the first First Minister of Northern Ireland under the Good Friday Agreement is set to launch an attack on the Backstop via the back door.

It would be easy to brush aside Trimble’s action as mere Quixotic, Brexiteer nonsense, but his key role in helping to deliver the Good Friday Agreement and his political bravery in sticking by it, means he is deserving of a bit more respect.

Trimble’s argument appears to follow the same lines as those recently put forward by his friend and former adviser, Lord Paul Bew. Bew claims that the Backstop is a top-down imposition on Northern Ireland which takes away the people’s democratic control, i.e. their consent – consent being the core principle of the Good Friday Agreement.

Trimble (and Bew’s) pro Brexit champions hail them as the authors and architects of the Good Friday Agreement.

A deserved accolade, but they are not its sole authors. The Good Friday Agreement was the product of long painstaking negotiations between the two Governments and a cross section of Northern Ireland’s political parties – though not the DUP.

While the final agreement was the result of multiple inputs, its core architecture – particularly the Three Strands of relationships at its core: internal: between the two communities, North/South between the two parts of this island and east/West between the two islands, comes from John Hume.

Hume’s protégé, Mark Durkan, who went on serve with Trimble as Deputy First Minister, is widely acknowledged as the expert on the detail of the Good Friday Agreement.

He has deftly refuted Trimble and Bew’s claims by highlighting how the Backstop, along with the Jan 14th Juncker Tusk letter, upholds the existing Strand I and Strand 2 conditions of the Good Friday Agreement and rules out any new regulatory divergence.

As Durkan has observed, is it not curious how those who now claim the Backstop undermines the consent of the Northern Ireland people were perfectly content to ignore the, bottom up, democratic will of the 56% in Northern Ireland who voted to Remain.

And, as Durkan adds:

“…they gloried in the UK Supreme Court ruling that the principle of consent specified in the GFA applies solely to a democratic choice between United Kingdom and United Ireland… [and] does not extend to the UK’s relationship with the EU.”

Impartial academics agree with Durkan’s read, including QUB’s Dr Katy Hayward who has produced this response to Lord Bew’s claims.

Perhaps I am wrong. Perhaps May’s Belfast speech will provide some real insight into how she plans to resolve her own contradictory commitments?

Eh no… on reflection, I reckon we’ll see Simon Harris acknowledge his mishandling of the Children’s Hospital and the Nurses’ strike and resign long before we see that.

7 thoughts on “Derek Mooney: In Fear of The Backstop”