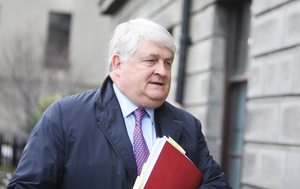 Mr O’Brien is claiming he was defamed by the newspaper on March 15, 2015, when My Lyons and other journalists reported over six pages on an unpublished PwC dossier into Ireland’s banks which had been given to the then Taoiseach Brian Cowen in November 2008.

The newspaper reported that the PwC report revealed 22 men and their associated companies owed Irish banks €25.6billion when the property bubble collapsed.

Mr O’Brien was number ten on the list of 22.

One of Mr O’Brien’s complaints is that he was wrongly “lumped” in with a “gang” of “developer kings”.

This evening, Ann O’Loughlin, in The Irish Examiner, reports:

Mr O’Higgins also played an interview given by Mr Lyons to RTE’s This Week radio programme on March 15th 2015, the day the articles were published.

Mr Lyons denied that showed his attitude in 2015 was that a small group of the biggest bank borrowers had disappeared off “into the sunset” and left the people of Ireland “holding the baby” at the time of the financial crisis in 2008.

He said he made no reference to Mr O’Brien during the interview and had no opportunity to outline what was said in the articles about Mr O’Brien, which was his loans were performing in 2008 and he went on to repay all his debts.

The interviewer had asked him, before beginning to record the interview, not to make any reference to Mr O’Brien because the lawyers had said “not to go near him”, he said.

“He Thinks It’s All About Him”