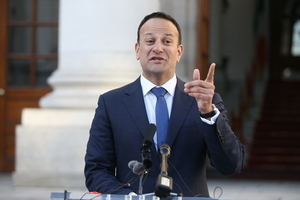 “There are two things in the world you never want to let people see how you make ’em: laws and sausages.”

If my memory and a OneDrive word search are both right, this is the second time I have used this beloved Leo McGarry West Wing quote to illustrate a point. The first time was at the end of March 2018.

Back then, I was bemoaning this minority government’s blatant contempt for Dáil decisions with which it disagreed and was especially irked at how it was treating James Lawless TD’s Online Advertising and Social Media (Transparency) Bill 2017 and the various opposition amendments tabled to Shane Ross’s awful Judicial Appointments bill.

This time… well, it’s the same thing, only slightly different.

The government is still showing the same contempt only now it is doing it via an obscure parliamentary device, which it deploys with worrying regularity, to veto Private Members legislation passed that has been backed by the Dáil, but with which it disagrees. The device is called the “money message”.

The “money message” provision comes from Article 17.2 of the Constitution. It says that:

Put simply, it means that legislation may only proceed to committee stage debate if parliamentary officials deem that no money message is required.

If they adjudicate, after the Dáil second stage debate, that a money message is required, then the Bill is stalled in its tracks and may not proceed until the government decides to issue such a [money] message, signed by the Taoiseach.

The old rules say that there are “no timeframes or deadlines regarding provision of these messages by Government”, i.e. the Fine Gael government can take its own sweet time and no one can do anything about it.

Its original purpose was to give the government of the days firm control of the purse strings… and for most of the past 80 odd years this has not been an issue.

Most governments in the past had workable majorities or arrangements that enabled them to vote down any opposition measure which did not accord with its budgetary policy.

This is important as in the Irish system the funding does not automatically follow the decision. It is not sufficient to say, hey, I would like to do X, Y or Z, you also have to find the money to pay for it.

Not a bad approach. It is certainly prudent.

But what happens when the provision is used not to control spending, but to overrule the legislative will of the Dáil?

This is precisely what Varadkar’s government is using the money message to do. Rather than just using it to prudently control and monitor public expenditure – something it might occasionally try doing in the Department of Health – it is using it to effectively veto pieces of opposition legislation it opposes but which the Dáil has passed by a majority.

According to analysis done 12 months ago by RTE’s Justin McCarthy 29 bills were stalled waiting for a ‘money message’.

A quick trawl through the Oireachtas website shows that the number has grown and now includes various pieces of draft legislation.

I am not arguing that all these Bills are perfect or worthwhile, indeed there are some items here with which I would personally disagree.

But, as far as I can discern, they have all been passed by the Dáil at Second Stage and are now stalled, awaiting committee stage scrutiny, because officials in the parliamentary offices have said that they each require a money message and the government has yet to issue them.

In many cases the expenditure involved would be incidental at most, but it is this word: “incidental” and how it is interpreted that is key to this issue.

As no one in the public service works for free, almost everything the State does has some form of cost, be it direct or indirect.  Giving people new rights or allocating a fresh responsibility to some department or agency all have some form of financial implication in a strict accountancy sense.

Of course not. The purpose of Art 17.2 was to prevent TDs from pushing through laws that created major financial implications for the State and thereby undermined the capacity of the serving government to control the budget.

It was not intended as a catch-all clause for a government with an overwhelming minority of 57 seats out of 158 to daily overrule the other 100 TDs and stop any democratically passed piece of legislation with which it does not agree.

The money message is not a proxy for a Dáil majority, but this government acts as if it is. It is enabling Varadkar’s government to do what it does better than any of its predecessors: do absolutely nothing.

‘This is the use of old politics to circumvent legislation by using an old interpretation of a constitutional article which is outrageous and undermines Members’ ability to have a Bill such as this passed. It flies in the face of all the rubbish we have heard about new politics. It shows new politics at their worst.’

It is a view echoed by many TDs and Senators. The committee transcript is worth reading in full as it gives some insights into changes agreed by the Dáil business committee into the operation of the Money Message process in December.

While the changes are supposed to make the process less opaque and give it some timeline, they will only apply to future pieces of legislation.

Bills which have been stalled up to now will probably be disappeared entirely and will have to be re-introduced all over again, from scratch, to benefit from the change – even though many of them have already been passed in full by the Seanad… and this government moans about opposition members wasting parliamentary time?

Laws and sausages. It’s not just seeing what goes into them that can turn your stomach, it’s also how long it can take to still deliver them way undercooked.