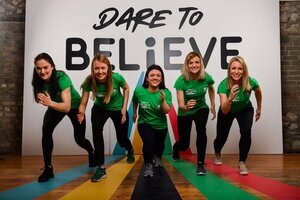 The Olympic Federation of Ireland launched Dare to Believe – a school “activation programme” in which Olympic athletes will take part in workshops in schools across Ireland.

Dare to Believe was developed by 2008 Olympian Roisin McGettigan, who says:

“When I came home from the Olympic Games, I was asked to speak at my local schools. I had all of these hard-earned lessons, international experiences and passion for my sport that I was bursting to share with the next generation, but I soon realised that presenting my story effectively was something I needed to prepare for.

I’m delighted that the Olympic Federation of Ireland, the Athletes’ Commission and the International Olympic Committee have backed this programme. Dare to Believe is an engaging programme that will make a difference in the classrooms and strengthen relationships with Olympians.”

3 thoughts on “Running Down A Dream”