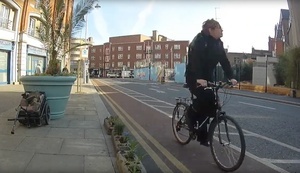 They took the lane into their own hands.

You may recall the makeshift bollards temporarily sequestering the cycle lane on Ryders Row, Dublin 1?

A video has surfaced. It’s not too exciting or revealing but does show the issue of people cycling being forced out of the contra-flow cycle track into oncoming traffic due to vehicles parking in the cycletrack.

The planters/bollards worked and after they went in a number of drivers were noticed slowing down to pull in but drove on when they realised they couldn’t.

Get Your Own Lane

The Lane Of No Shame

11 thoughts on “Ryders On The Storm”