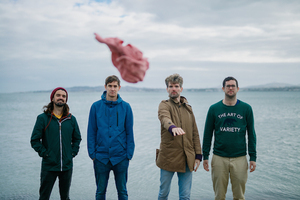 Stonking single from new album ‘Flow’ from Dublin-based Bouts, who have just been confirmed as one of the first 30 acts for Knockan Stockan festival in Blessington this July 19-21.

We are dotted around Europe, but base ourselves in Dublin for writing & rehearsing. I live in London, Barry Bracken (singer, guitar) lives in Amsterdam while both Colin Boylan and Daniel Flynn live in Dublin (although both hail from Monaghan originally)

‘Flow’ is our brand new 2nd album, out now on Wonky Karousel and we are next bringing it to Amsterdam for a big headline gig in Cinetol on April 5 (also Kurt Cobain’s 25th anniversary)…

Live From The Blue Note