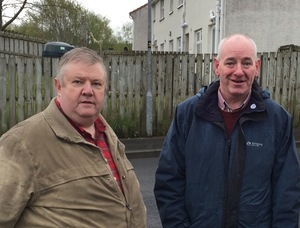 Though this be hard for some folks to accept, I do plan these columns.

My usual routine is to type up a few paragraphs late on Monday night and then finish off the column over coffee and toast on Tuesday morning.

This week, as I have a couple of meetings early today, I did it differently.

Around 2pm yesterday I sat down in front of a blank screen and hoped for inspiration. As I started to type I was still unsure which one of two routes to pursue.

Should I write a follow-up to last week’s column and respond to the online criticisms from Sinn Féin supporters for calling out their confusion on a border poll?

Or should I write about Minister for Justice, Charlie Flanagan’s churlish tweet chiding the Seanad for doing precisely what it is supposed to do, scrutinising and amending legislation?

I had started to write some rough opening paragraphs on both topics when I received a piece of political news which wiped both options off my screen.

A good friend called to tell me that it would shortly be announced that Mark Durkan would be Fine Gael’s Dublin European Parliament candidate.

To say I was flabbergasted is to put it mildly.

I have known Mark politically and personally for almost 20 years. There are very few politicians in Northern Ireland for whom I have a higher respect.

This is evidenced by the number of times I have quoted him in this column over the last few years, most recently in this one, on the backstop, where I cite Mark’s acknowledged expertise on both the Good Friday Agreement and Brexit.

With only a few exceptions – and the primary one is Bertie Ahern – Mark Durkan is best informed political voice on the Good Friday Agreement.

He understands it purpose, its language and its workings with an innate level of understanding and practical detail that you do not hear from noted academics or lawyers.

He has been one the strongest and fiercest defenders of the Agreement, particularly against the madness coming from ill-informed Brexiteers.

He has been forthright and direct in exposing the hollowness of their claims that the Good Friday Agreement has no ramifications for Brexit.

Mark’s dedication and commitment to politics and more importantly to the importance of policy and ideas are second to none.In many ways he is the least political politician you would meet.

As the SDLP statement following his announcement yesterday said:

So, with all this praise you might imagine that I am now about to set out why Dublin people should vote for Mark on May 24.

No, not a chance.

Though I have the upmost respect for Mark and continue to regard him as one of the finest defenders of the Good Friday Agreement, I will not be voting for him anywhere along my ballot paper.

This will not come as news to Mark, he and I had a short exchange of texts yesterday during which I mentioned this.  What was announced yesterday was not a major political development, it was a stroke – pure and simple.

Yesterday’s launch had the all the originality and guile of Charlie Haughey’s 1982 nomination of Dick Burke to be an EU Commissioner. Except Burke ended up ahead in that failed stroke. That won’t be the case this time.   This is college politics projected into the national arena.

It is an attempt by the Taoiseach Leo Varadkar to have a sideswipe not just at Fianna Fáil in the aftermath of its partnership deal with the party once led by Durkan, it is also aimed at the leadership of the SDLP.

It is particularly targeted at Colum Eastwood for his having the temerity to seek a partnership not with Leo’s gang but with the Fianna Fáil crowd for whom Leo has nothing but contempt.

That Mark finds himself embroiled with this stroke is saddening.  I know from our brief exchange yesterday that Mark does not see it this way. He is adamant that he would do nothing to hurt or undermine Colum’s position and that he has the highest regard for his fellow Derry man.

Maybe this is an example of Mark as the un-political politician.

While Mark’s move to Fine Gael a few weeks after an SDLP special conference endorsed the SDLP/FF partnership, and just one week after Colum received a huge reception at the Fianna Fáil Árd Fheis, may be embarrassing for the SDLP, it is just that, embarrassing. The feeling will soon pass.

Indeed, Mark’s departure at Leo’s summons may have the unintended consequence of showing the FF and SDLP leaderships that their partnership needs more definition, better expression and increased impetus.

To the best of my knowledge Mark Durkan did not express any reservations about the Fianna Fáil/SDLP partnership either before or after the vote.

It is my understanding that he welcomed the clear decision taken by the SDLP in Newry. That said, while I never discerned any antagonism from Mark towards Fianna Fáil, I always assumed that he saw himself as aligned to the Irish Labour party – so I can only imagine the howls of anguish in their offices on hearing the news yesterday.

All of which brings me to the core of the reason why I won’t vote for Mark. While his defection to Fine Gael is hard to understand, this is not about partisan politics. I could transfer to a Blueshirt… sorry, an FGer. I have done it before and may even do it again, but not this year. (Full disclosure: I have transferred more often to Lab and Greens than to FG)

No, this is about the squandering of an opportunity twinned with what I see as the exploitation of a real political talent in the service of a great political ego.

According to most poll watchers Mark Durkan was well placed to win back his Foyle seat at the next Westminster election, and given the volatility in UK politics who is the say that that election is not too far away?

That is where Durkan’s talents and abilities are most needed right now. Like it or not, Westminster is where Brexit will be decided and shaped and we as an island still have a lot of skin in that game.

No matter what happens with Theresa May’s “meaningful vote” next week the Brexit issue is not going away anytime soon.

It is far more important that the real concerns of the people of Derry, of Northern Ireland and of Ireland, as a whole, have a sensible, informed and considered voice in Westminster making the case against Brexit and for the Good Friday Agreement.

Durkan was that voice.

I understand the frustration and weariness he must have felt at watching the Brexit debate from the side-line while waiting for the opportunity to get back in the game and do what he does best.

It is an indictment of the political establishment here (on all sides) that his talents were not put to better use pending his return to the frontline in Westminster – but installing him as the stabilisers on the Frances Fitzgerald campaign tandem is not the answer.

If the Taoiseach’s desire to ensure a Northern voice in the European Parliament were genuine, then the way to do it was to reach a cross party agreement to back Mark Durkan as an independent.

This is the approach that was sensibly adopted in the 2018 Seanad by election that saw the election of Ian Marshall last year. It is one approach suggested yesterday by Sinn Fein’s Éoin Ó Bróin.

In a quirk of political history, it seemed at one-point last year that Durkan was set to join Marshall in the Seanad, but it was not to be. This is a pity as his input would have had far more benefit than those of the FG placeman who got the other vacancy.

However, none of that happened and now we have Durkan fighting Labour, Soc Dems and Ind candidates for a second Fine Gael seat that will not exist.

I know Mark will campaign hard to become an MEP for Dublin – even if this does not extend as far as living here – but it will have to be without my help or vote.

I’m sorry it has turned out this way.

11 thoughts on “Derek Mooney: I Admire Durkan, But He Won’t Get My Vote”