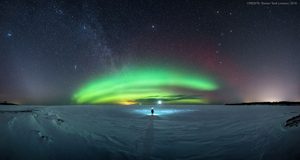 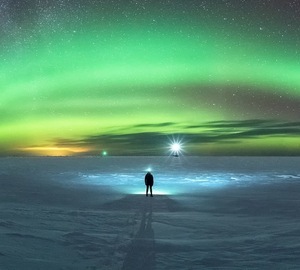 The Northern Lights shine above the frozen surface of Lake Superior on the west coast of the Keweenaw Peninusla in a 10 shot panorama captured over the space of three hours at the start of this month. To wit:

At left, a faint band of Zodiacal light rises sharply from the horizon crossing Mars and the Pleides star cluster. Both the distant galaxy M31 and our own Milky Way shine above the greenish auroral arc. Navigational north pole star Polaris is centered above and accompanied on the right by the northern night’s most recognizable asterism, the Big Dipper. Terrestrial lights include markers for two breakwaters on the the horizon near the center of the scene.

The Swimming Pool Of Your Dreams

6 thoughts on “One To Beam Up”