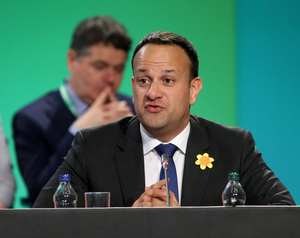 The Finance Minister needs to buy the Taoiseach an abacus. It would also be helpful if he would brief him on certain economic realities. For the Taoiseach has been both promising and mispricing the irresponsible.

This would be a substantial rise on the current €35,300 (€70,600 for a couple) tax threshold. This proposal is not new. The Taoiseach came out with this last November.

What is new is the Taoiseach’s claim that this tax cut would be relatively cheap.

Back in November it was generally conceded that this proposal would cost €3 billion. And for good reason. That’s the price tag the Revenue Commissioners put on the proposal. Each increase of €1,000 in the standard rate tax band costs €206 million.

However, the Taoiseach went on to say:

‘Let me tell you how we’ll pay for it. Because there are more people working every year, and people are earning more, we’ll take in about €1.8 billion extra in income tax. I want to give about half of that back to you, taxpayers and pensioners.’

So now this €3 billion tax cut will only cost €900 million (and is he including pension increases in that?). How did this happen? I have no idea. I wonder if the Taoiseach does.

Apart from mispricing, the Taoiseach’s proposal couldn’t be more irresponsible. This is all the more the case given the ESRI’s modelling of the potential impact of Brexit.

This Cabinet was briefed on this paper before it was published, so the Taoiseach was aware of its findings before his speech at the Ard Fheis.

The ESRI found the impact of Brexit could be substantial. In the worst case scenario – a chaotic, no-deal Brexit – the ESRI estimates that over the next five years

20 percent could be knocked off of real GDP

Employment could be about 50,000 lower

All this will, of course, throw public finances off course with the deficit rising by approximately €2 billion.

Even in a ‘deal-done’ Brexit – where the UK makes an orderly agreed exit from the EU involving a transition period up to 2020, and a free trade agreement with the EU thereafter – the economy will still be hit: up to €10 billion could be knocked off GDP while employment could be 20,000 – 25,000 lower.

While the impact of a done-deal Brexit would be less than a disorderly affair, it only looks good by comparison. On its own, it still represents a significant negative impact on the economy.

If this wasn’t bad enough, our major trading partners are in serious trouble. The Eurozone is flirting with yet another recession while in the US, the Trump tax cuts are wearing off with growth slowing down.

In this highly uncertain, potentially volatile environment – not even taking into account the substantial fines for missing our EU climate change targets (have these even been factored into medium-term government projections?), the downside impact of any change in international taxation and the eventual rise in interest rates – why would the Taoiseach make such a proposal?

Here are some explanations.

Escalation of commitment: the Taoiseach made a promise before a Fine Gael audience last November. Rather than step-back in the face of growing uncertainties, he is irrationally doubling down because to do otherwise might suggest he was wrong to make the proposal in the first place.

Cynical: the Taoiseach knows he cannot fulfil this promise but maintains it as a ‘flagship’ policy. If external events intervene to prevent it, he can always blame the Brits.

It’s What We Do: just like Fianna Fail, who cut every tax possible prior to the crash (egged on by Fine Gael), cutting taxes is in the genes regardless of what economic reality tells us. The scorpion can’t help being a scorpion.

Even without the negative impact, the proposed tax cuts are highly inequitable. In a previous post we saw that the Government intends to cut public services and social protection in real terms over the medium-term.

In effect, the Taoiseach’s tax cuts proposals will not be financed by ‘more people working and earning more’ as he put it. It will be financed by real spending cuts.

Now add in Brexit – even a done-deal one – and see what will happen.

In truth, none of this is sustainable. The Taoiseach must surely have some sense of this. But his determination to hoover up votes with the promise of tax cuts (which didn’t get Fine Gael very far in the last election) trumps reality.

Progressives will no doubt highlight the inequity of his proposed tax cuts and they would be correct. But there is another prize – painting the Government as being fiscally irresponsible, a mirror-image of the Fianna Fail’s reckless pre-crash policies.

Even the Irish Fiscal Advisory Council doesn’t believe the Government:

‘ . . . the medium-term budgetary plans are not credible,’

Ultimately, the Taoiseach’s proposed tax cuts are fiscally irresponsible. Fianna Fail has no alternative. It is time the Left step forward with a credible path forward. And if that means challenging some of their own proposals and analysis, all the better.

Do it publicly, invite people into the debate over the process of building a productive economy that can withstand the shocks of uncertain events.

That is proper leadership. And, boy, do we need some that now.