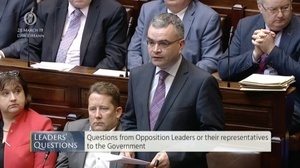 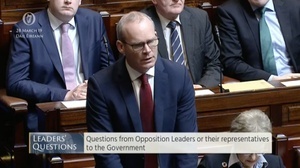 During his contribution, Mr Calleary mentioned an interview the Housing Minister Eoghan Murphy’s gave RTÉ’s Morning Ireland this morning in which Mr Murphy accused journalist Bryan Dobson of speaking from an “ideological” position when the broadcaster asked the politician about the Government’s record on housing and homelessness.

Mr Calleary asked Mr Coveney to “finally ‘fess up” and admit the Government’s housing plan Rebuilding Ireland – launched when Mr Coveney was Minister for Housing in 2016 – is not working.

Mr Coveney said nobody is denying the facts and the figures of homelessness in Ireland, and the emotion attached to the same, before going on to cite Rebuilding Ireland figures.

“The truth is, deputy, we are listening to others in this house and, indeed, experts outside it. Rebuilding Ireland was always a policy initiative that would change, depending on where the pressures and demands were coming from and that is what it’s doing.

“But if you look at the number of people that we are taking out of homeless right now, it’s a higher figure than ever before.

“If you look at the number of social houses that are being delivered, it’s higher than at any point in the last decade.

“The truth is there are more families and individuals coming into homelessness now than I think anyone in this house predicted.”

Mr Coveney said there is work to be done but the Government has “changed the housing market in Ireland” with rent pressure zones and increasing the powers of the Residential Tenancies Board.

He also said Rebuilding Ireland was a five-year housing plan and the Government is only three years into it.

He called on the Government to support a bill proposed by Sinn Fein TD Eoin O’Broin – aimed at preventing buy-to-let landlords from evicting tenants.

“The truth is that this State is not the only one facing this challenge. Last year, almost 20,000 households approached housing bodies in Northern Ireland because they consider themselves homeless… and solutions have to be found there as well as here. This is a challenge that many countries are facing.”

28 thoughts on ““This Is A Challenge Many Countries Are Facing””