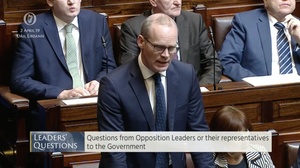 Tánaiste Simon Coveney in the Dáil

Brexit was raised during Leaders’ Questions in the Dáil.

Tánaiste Simon Coveney said he will be bringing two Brexit papers to Cabinet this evening when it meets at 8.30pm.

He said the Brexit negotiations have “intensified significantly” in recent days and those will continue.

“Ireland is not going to allow a situation where the UK, leaving the European Union without a deal, drags Ireland out of the single market with it.

“We cannot allow that situation. And what I mean by that is, the response being a checks in EU ports, on all Irish products. That is not a runner and will cause significant damage to our economy so we will not allow it.

“So what we need to do, and what we are doing now, is we have intensified our discussions with the European Commission on how we respond to that dual responsibility of protecting the Good Friday Agreement and the peace process and the relations on this island as best we can.

“While at the same time, reassuring that we can reassure other EU countries that Ireland is protecting the integrity of the single market that we all share.”

“….We have to find a way of ensuring, as I say, that we protect the single market’s integrity but that we avoid physical border infrastructure on the border.

“And that is something that we do not have an agreed plan on. But we are working this week and presumably into next week on, if we need to, in the context of an no-deal Brexit.”

Fianna Fáil’s deputy leader Dara Calleary told Mr Coveney that every party in the Dáil wants to work with him in preparation of a no-deal Brexit.

He said members of the Dail should be allowed to see, or have some knowledge of, the Government’s “plan”.

He added: “Hope is no longer a strategy. You’ve hoped for a long, long time but it seems, whether by accident or design, we’re going towards a hard Brexit.”