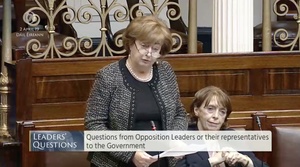 Decision on National Broadband Plan is due before Cabinet before Easter @simoncoveney tells Dail. “We will make a decision with our eyes wide open on costs,” he says #iestaff

Social Democrats TD Catherine Murphy raised the National Broadband Plan – for which there is one bidder – during Leaders’ Questions.

She raised concerns that while the plan was initially set to cost €500million, “the Government, and indeed, departmental officials have now conceded that the ultimate cost will be multiples of that”.

She asked Tánaiste Simon Coveney if certain projects from the Government’s Project Ireland 2040 plan will have to removed on account of the higher-than-envisaged costs of the NBP.

“Are we likely to be bounced into something that will cost billions rather than hundreds of millions, purely because we’ve supposedly gone too far into a flawed process? It smacks of not learning lessons from the National Children’s Hosptial shambles.”

Ms Murphy then went on to ask – based on the Taoiseach saying the NBP may not go ahead in the event of a on-deal Brexit – if the NBP is a “casualty”, could this mean Project Ireland 2040 “requires a complete revision?”

She asked how much has been set aside by Project Ireland for the NBP.

And she asked, given it’s going to cost multiples of €500m, where the money will come from and what other projects will suffer as a result of the extra funding required.

Mr Coveney responded and said it’s clear the cost of the NBP is “not going to be cheap”.

“We now have to make a decision on whether we want to go ahead with it or not. The cost is high due to the significant ambition of the project and the scale of the build.”

Ms Murphy told Mr Coveney he didn’t answer any of her questions.