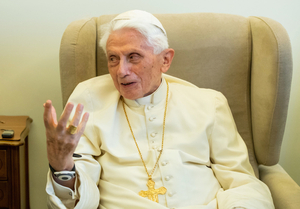 “Among the freedoms that the Revolution of 1968 sought to fight for was this all-out sexual freedom, one which no longer conceded any norms,” he wrote…

He said the spread of explicit sex education for young schoolchildren and nudity in advertising had contributed to a loosening of moral bearings.

The former pontiff said the sexual revolution had led to homosexuality in Catholic establishments.

He said paedophilia did not become “acute” until the late 1980s and was caused by “absence of God”.

Published in the German Catholic magazine Klerusblatt, the 5,500-word letter is divided into three parts.

The first part laments the 1960s as a time when “previously normative standards regarding sexuality collapsed entirely”.

Next, the letter examines how the sexual revolution affected priests, creating “homosexual cliques” in seminaries.