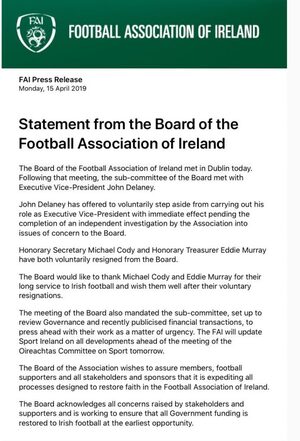 The FAI has said John Delaney has offered ‘voluntarily to step aside’, pending an independent investigation into issues of concern to FAI the board pic.twitter.com/nW2BbrJ2JK

Some confusion on John Delaney’s position. Statement said he “offered to voluntarily step aside” pending the completion of an investigation. When asked if the board accepted his offer an FAI spokesman declined to clarify saying: “No more comment. Thank you” 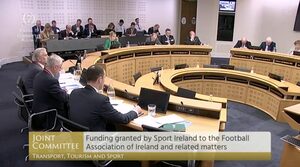 The Minister for Sport Shane Ross and members of Sport Ireland will appear before the Oireachtas sports committee to answer questions about the Football Association of Ireland (FAI).

They will say they expected the FAI to be “open and transparent” in relation to “all relevant issues”.

Despite this refusal to answer certain questions, Sport Ireland will tell the committee that the organisation still “learned some information that we did not previously know from our correspondence and meeting with the FAI”.

“Not only were Sport Ireland not notified of a material deterioration in the FAI’s financial position in 2017, it appears that the Board of the FAI was similarly not notified. That such a serious financial situation existed, and was not reported to the FAI Board, is concerning from an internal financial control and general governance perspective.”

“The events of 2017, as described by the FAI, give rise to serious concerns on the FAI Board’s application of it’s governance and oversight role, as required under Sport Ireland’s Terms and Conditions of Grant Approval.

“As a state body that invests substantial funds in the FAI, Sport Ireland is also very concerned about the FAI’s adherence to appropriate internal financial and management control procedures during this period.”

“In the course of the Board’s discussion [on April 9 when it decided to suspend funding to the FAI], it was noted that in the FAI’s written opening statement submitted to this Committee ahead of last week’s hearing the FAI acknowledged that Clause 4.3 of the ‘Further Reporting’ section of Sport Ireland’s Terms & Conditions of Grant Approval was not met. This relates to 2017, whereby the FAI did not notify Sport Ireland of any material deterioration in its financial position.

“Notwithstanding some positive steps taken by the FAI in the preceding days, it had been acknowledged by the FAI that there had been a breach of Clause 4.3.”

In relation to the conditions needed for the restoration of the funding, it says:

“On the limited number of occasions in the past when Sport Ireland has had concerns around governance and financial control and has acted to suspend and withhold funding to a sporting body, the following process has been followed:

1. An audit of the sporting body’s governance and financial control.

2. The establishment of a liaison process with the sporting body to closely monitor, verify and support (as appropriate) the NGB’s implementation of the audit recommendations to verify compliance with the Terms and Conditions of Grant Approval.

3. The liaison process is overseen by Sport Ireland’s Audit & Risk Committee, with periodic updates and recommendations made to the Board.

4. Grant Funding is withheld until sufficient progress has been made on implementing the audit recommendations, and governance and financial control issues have been progressed.

5. Once progress is made on implementing the audit recommendations, and assurance is received of the effectiveness of governance and financial control, staggered payments are generally made to the NGB in question.

Sport Ireland will follow this established process with the FAI, as it has in the past with other NGBs when similar situations have arisen.

Sport Ireland’s Audit & Risk Committee meets on April 18th and will discuss the specific requirements, from a governance and financial control perspective that will be required of the FAI.

It also notes the Office of the Director of Corporate Enforcement’s engagement with the FAI:

“Depending on what emerges from the Mazars and Grant Thornton reviews, we will also consider a full audit of the FAI by Sport Ireland’s appointed auditors, as per Sport Ireland’s Terms and Conditions of Grant Approval.

“The scope will be defined by Sport Ireland’s Audit & Risk Committee, and will be set with reference to our satisfaction with the scope and findings of Mazars review.

“In light of the acknowledgement by the FAI that there was a breach of the Terms and Conditions this audit will be as broad and extensive as necessary to satisfy Sport Ireland that the FAI is compliant with our Terms and Conditions of Grant Approval, including that its internal financial controls and management, as well as its general governance, are of sufficient standard in order to restore funding.

“The specific mechanisms to satisfy Sport Ireland on the effectiveness of the FAI’s governance and systems internal of financial control will be proportionate to the significant level of Sport Ireland investment in the organisation.

“Our specific requirements will be informed by the response of the FAI during the liaison
process.

“Sport Ireland is also very cognisant of the FAI’s engagement with the Office of the Director of Corporate Enforcement on their particular enquiries, which we understand to be substantial.

“We will continue to closely observe this process with keen interest.”

In addition, it says:

“With regard to next steps, Sport Ireland has accepted the FAI’s offer of engaging with the FAI on the composition of their new Governance review group (to include a majority of external members) and to assist in identifying its external Chairperson.

“Sport Ireland has identified a potential candidate and hopes to agree this with the FAI today (Monday April 15th). The terms of reference of this group will be agreed with Sport Ireland and finalised by the group once it is established.

“Noting the FAI Board’s ability to appoint an independent person to the sub-committee examining these matters, Sport Ireland will nominate also a person with relevant experience to sit on this committee.”

The statement also says Sport Ireland will liaise with the Minister for Sport Shane Ross before any decision is made with regards to restoring funding to the FAI.