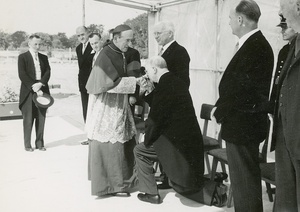 US Democrat congresswoman Alexandria Ocasio-Cortez recently said that many people had a simplistic view of Martin Luther-King, believing that he merely asked for civil rights and got them. Job done.

She was appealing to people to make their own power, aware, no doubt, that she was being put in that isolated position of being the voice for many, and, as so often happens, being the target for so many more. But also recognizing that one voice is not enough, that democracy only moves when the mass of people decide to move it.

For most people, social protest, in the here and now, as opposed to way back in the comfortable romantic past, seems messy and unpleasant and even unreasonable. Which of course it is. That was the point Ocasio-Cortez was making.

But, in reality, Martin Luther King Jr was not only shot dead. Whoever shot him, and that’s still an ongoing debate, shot him in the mouth. Which speaks volumes. If you’ll forgive the grim pun.

Here in Ireland we don’t really do freedom of speech. It seems to be considered impolite, or a bit low. People who do speak out tend to be regarded as trouble-makers, with an unreasonable propensity for “taking issue”.

Though from the perspective of those who do speak out, issue is not taken nearly often enough in Ireland.

To the outspoken, the general Irish public fit perfectly the prejudicial description of “sheeple”; an obedient, malleable flock that the powerful shoo this way and that and patronise with occasional explanatory tit-bits and flatteries, the disrespect barely hidden behind a thin veneer of smiling contempt.

The powerful in Ireland now occupy the place that used to be filled by Archbishop McQuaid, where all are expected to kneel and kiss the holy ring; (“ring” in whatever sense you choose to understand the term.) Everyone competes to occupy this powerful space, in fractals or Russian dolls of the same power struggle from the great to the small.

All the way down the pyramid the perceived “nobodies” at each level are expected to genuflect accordingly to their perceived betters.

Austerity was an amazing phenomenon in this regard. Everyone noticed. We were the talk and wonderment of Europe. The Irish were so, so quiet. So obedient. Is it any wonder that the occasional free-speaker might sound “unreasonable” or annoyingly loud?

Even a whispered No in such a servile environment sounds startlingly loud, and perhaps even insane. There can be no truth only the truth of the elite.

To present a varying narrative is to be “difficult” and un-cooperative. Not a team player. Everyone who speaks out in this vacuum sounds like Bob Geldof at his most belligerent.

“Oh look, it’s your man/woman again, taking issue with something. Boy, does that joker have personal problems.”

In this regard, everyone is complicit in guarding the pyramid. Power is always correct, and the individual is always wrong.

Is it fair to generalise and state that the Irish are authoritarian in character? It’s a question you don’t hear bandied around much. But if it were found to be true it shouldn’t come as a surprise to anyone really, given the twin oppressions of Empire and Church lurking in the psychological background.

If you wanted to make an authoritarian population you couldn’t have picked better ingredients than the combined insanities of the British Empire and the Catholic Church foisted on an unsuspecting peasant people.

We just don’t go there, and yet, we’re so quiet under pressure. Fintan O’Toole wrote that the Irish could conceivably hunker down for a thousand years and take all the punishment that authority could fling at them, and simply endure, with barely a peep of protest. Endurance is what we’re about.

And we are so disturbingly quiet when a minority is targeted or is hurting, like the way homeless people have been used by this government as bait to invigorate the property market. We look quietly on, glad it’s not us, until suddenly, it is us, and then we look out of our hotel window and realize no one in Ireland cares what happened to us.

The economy is recovering, that’s the main thing. Most people are “happy”. Not all. But most. The silent majority are happyish. It’s enough. We will endure.

And somehow, we fortunate ones always manage to spin a story to explain away the social casualties as the architects of their own sorry condition. That they brought it on themselves through fecklessness. This harsh judgement itself yet another social injustice piled upon those at the bottom of the obedient, enduring heap.

Adorno has a term to describe a society’s mood or character. He calls it a society’s “phenomenon”. Ireland’s phenomenon seems like a parent/child relationship. You meet this same interactional character at every level.

The nanny state someone once called it. The state is the parent and the citizens are the children and they help the state best by being obedient and by always “complying”; this is the state’s favourite new word.

The children have to strive to be the best children in the world, even if many of them have been denied by mammy state the UN right to shelter. Hush now children don’t you cry…Be quiet and be “good”. Ssh, daddy is on the phone to the vultures.

The idea of needing permission to speak is dealt with in detail in Foucault’s analysis of the Greek word parrhesia, which referred to the duty or allowance for a citizen to express criticism or opinion concerning the democracy.

There were parameters as to who could speak and who couldn’t. Slaves, for instance, had no right to speak. (In our time these might be corporate or public service employees, but not taxi-drivers.)

In our time and place it is recognized that democratic freedom of speech and expression are their own permissions. They come with the democratic bundle. Particularly so in a republic.

A republic without freedom of speech is like a pub with no beer. Nevertheless, it is still generally believed that freedom of speech is restricted to elites and that anyone else indulging in outspokenness or, God forbid, criticism of the great and the good, is simply a trouble-maker or a crazy person.

The internet blew the entire idea of restrictions on opining wide open and suddenly everybody could express an opinion, no matter how crazy or ludicrous.

But what became clear very quickly was that while everyone now had an opportunity to be heard, very few had actually anything worthwhile to say, and soon the internet deteriorated into something like an ongoing slanging match in a kindergarten.

Club-wielding trolls ruled cyberspace with practised insult until eventually, horrifyingly, one of them lurched unimpeded straight into the White House and parked his fat arse in the president’s chair.

So, the game has changed utterly and has created a situation where if you now feel you have something worthwhile to offer, the democracy actually needs your contribution. Which is what Ocasio-Cortez meant when she said build your own power.

All the arts of power-politics and media are currently employed in attempting to sway the crowd to move this way or that, because democracy still depends on the majority vote and politics is ultimately reactive.

In our country, for instance, Fine Gael and Varadkar will only abandon or amend the ideology of privatisation that is causing so much pain to so many Irish people, when they feel pressure from the majority.

If the majority don’t object, even in the face of 10,000 people sacrificed to homelessness to feed the privatisation ideology; that majority silence is as good as a vote of confidence in the privatisation policies being pursued by the Fine Gael party.

Fine Gael are always accusing the left of being driven by “ideology”, while they, presumably are driven by “common-sense”; when it is clear to anyone with even half a brain that privatisation is also an ideology.

This kind of evasion is similar to the type of intellectual con that emanates from Fox News, and is, I suppose, to borrow Adorno’s term, the chief “phenomenon” of neo-liberalism. A kind of huckster/grifter political style, to put it kindly.

Even so, people are wary of causing a fuss by protesting, especially here in Ireland where quiet obedience, instilled by the brothers and the nuns, is still seen as a virtue. Many are fearful that if they do protest, they may inadvertently trigger a revolution, with perfectly good cars left burning in the streets.

This is what psychologists call “catastrophising”. The system however is unlikely to break or unravel from the effect of people’s dissent.

The system will more likely strengthen from the bit of stress as the political class re-align to accommodate people’s stated wishes. Because democracy is ultimately a kind of controlled mob rule.

And neither does dissent have to be some elaborately staged protest with organisers and whatnot and rock bands setting fire to guitars.

An email to local elected representatives expressing disagreement with, for instance, a housing policy that results in mass homelessness, and advising that in the absence of visible action to rectify this insult to decency a vote against the candidate is guaranteed at the earliest opportunity, is bound to get a politician’s attention.

Especially if streams of such reminders came flooding in regularly from all directions on various issues where political complacency was short-changing citizens.

As Alexandria Ocasio-Cortez has recognised, even a thousand personalised modest objections to government policy by voters would be a louder shout than any argument she alone could make.

Democracy has chores. It’s not all shopping and fucking you know.