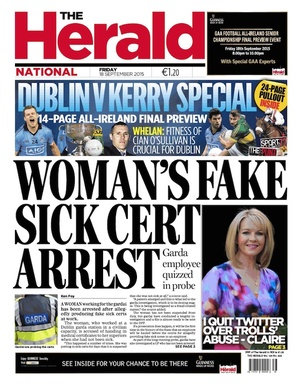 The case against Ms Margiotta collapsed after Judge Patricia Ryan ruled her rights had been abused as she had been denied access to a solicitor while in custody, and her privacy breached as her medical records had been accessed without her consent.

The case against her brother Dr Margiotta was also dropped.

“The prosecution’s case was that Dr Margiotta had provided his sister with medical certs to say she was not fit for work. The gardaí did not dispute that she was unwell at the time, but claimed the medical certs were obtained by deception.

“The certs were signed by Dr Margiotta, but bore the stamp of other doctors who worked or had worked in the practice where he was working. The trial heard that an expert had given an opinion that locum doctors using the stamp of another doctor in a practice is not unusual.”

Now, Ms Margiotta wants a full inquiry into the matter.

The Examiner reports that three gardai from Store Street Garda Station arrested Ms Margiotta at her home in Navan, Co Meath on August 11, 2014 – three weeks after she made a complaint of bullying against a Garda member – and told her she was under arrest for fraud.

They told her this was in connection with how she got sick notes for days missed at work, despite nobody from Human Resources speaking with her about the matter first.

She had missed work “over a dozen occasions” between January and July 2014, during which she suffered a form of depression following the death of her mother, to whom she was very close.

This was reported on the front page of The Herald with the headline “Dublin based garda employee arrested for using ‘fake sick certs’.”

“She was putting in sick certs for days that is it suspected she was not sick at all…If a prosecution does happen, it is understood that it will be the first time in the history of the State that an employee will be hauled before the courts for allegedly providing fake sick notes to their employer.”

But on Saturday, June 10, 2017 she was at her father’s house in Finglas when gardai called again and told her she was to be taken to court to be charged.

Another 21 months passed before the case came before Judge Patricia Ryan and collapsed.

Ms Margiotta hasn’t been contacted by her employer since her arrest in August 2014; she has been mainly without an income since; and she has yet to be informed about what happened to her bullying complaint.

Related: Trial of garda civil servant in relation to use of bogus sick certs collapses (The Irish Times, March 26, 2019)

The Lane Of Shame